I love small messages that appear unexpected in the normal course of life.

The chairs and tables on the terrace of a nice restaurant in the city of Fürth were still empty - waiting for the first sun worshippers.
Some unknown person must have fetched one of the restaurants’ chalkboards, put it on a table and wrote “Die Hoffnung stirbt zuletzt” on it.
This means “Hope dies at last”.
Puh - heavy stuff. I want to know whether the guy meant it in a positive or a negative way.

Positive: “Hey evil life, you can throw at me whatever you want - you will never bring me down as long as I believe in myself”.
Negative: “Oh my dear, actually I’m already done but I’m too naive to get aware of it because I still hope for a miracle”.

He put the sign on top of the table. That means he wanted the people to see it. Usually one is quiet and hides from the light when all hope is gone instead of shouting his bad luck out loud.
This guy did shout with his chalkboard. Therefore I’m quite sure that he was ready to fight against bad circumstances, against the bum that is supposed to be his boss or against life itself. If you listen carefully you might hear him screaming
“I’ll make it. You’ll never bring me down. Hope dies at last”.

It’s a pity that I’ll probably never get to know him. 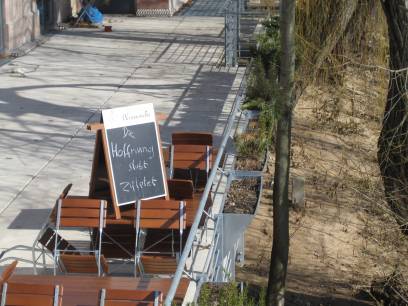 Two hours later the chalkboard was gone and a couple was sitting on exactly that table having some beers. I wonder whether they knew that this was a very special table. The place where a human being took on his fight with life. 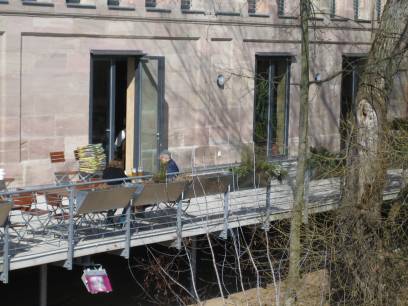