Finally I’m back. No more ties, no more suits, no more demos for the moment.
I really liked my colleagues from the US ordering Schnitzel or a Zwickl beer in the restaurant. The way they pronounce “Zwickl” was worth the trip.

The last evening I walked around in the city on my own. I wanted to get at least a short glimpse of Vienna. All the old buildings were illuminated and the city looked great. My camera, my tripod and I had a great time. 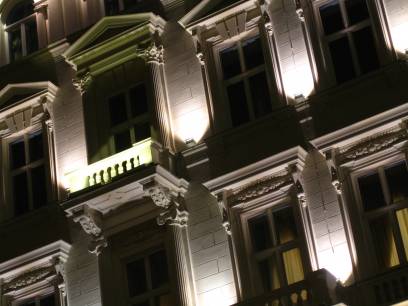 The façade of the famous “Hotel Sacher”

I saw a building illuminated in blue and walked there to make some pictures. On my way I heard music from the distance. Waltz music. Kitschy. Something was going on in front of the building. Unfortunately the whole area was off limits. So I jumped over the fence and tried to find out whats going on. I felt like a special agent.
In front of the building was a big frozen surface with dozens of ice-skaters in ball robes. The men were dressed like hussars and the girls weared strapless ball gowns. I pitied them a lot because the temperature was below zero. Guys with big cameras were running around and a man on a crane shouted instructions. In the back was a full symphonic orchestra.
I was in the middle of a movie set for a kind of ice-skating-fairytale-movie.
The waltz music started again and the folks danced on the ice in front of the blue building.
Suddenly a guy stood beside me. He must have been jumped over the fences, too. We watched the scenery and talked a little bit. He told me that he was a guy from Oregon and on his first trip to Europe. He landed just a few hours ago and this was his first night in Europe.
Well, he was absolutely impressed and looked around with big eyes. The old illuminated buildings everywhere, waltzing sound in the winter air and an army of beautiful girls in ball gowns dancing on ice. He said that he never expected Europe being that way. I tried to tell him that Europe in general isn’t that “european” but it was too late.
Ok, it was only a movie set and I’m not from Austria but in that moment I was a little bit proud of being an European and that the guy liked my continent. 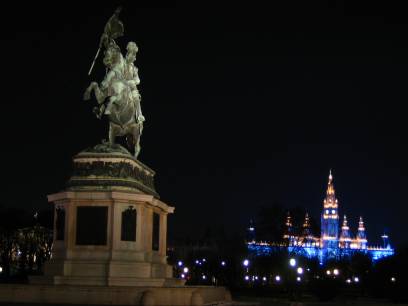 The blue building near the Heldenplatz 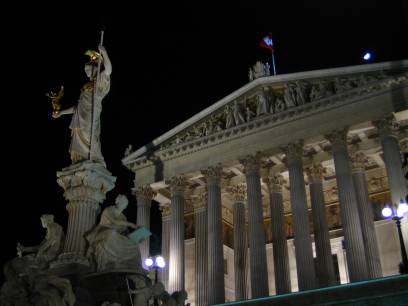 By coincidence we parked in a very very old parking garage from 1918. It had even petrol pumps inside and heating devices for the cars. Crazy. An old guy sat in a small booth and sold tickets for the cars. He forbade to make pictures so I had to do it secretly. 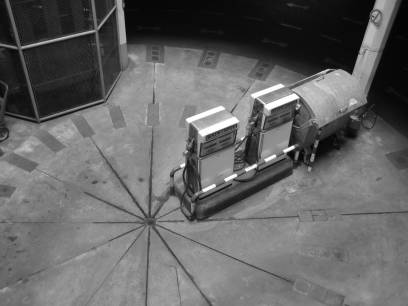 Finally I saw “them” even in Vienna. Europe is infiltrated. 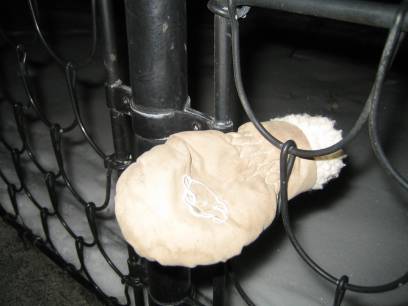