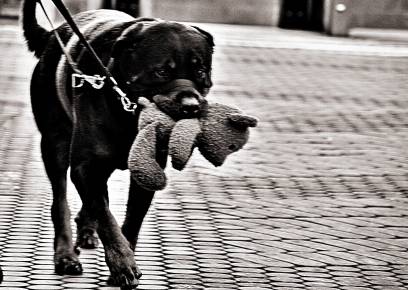 Beside the World Cup there are few other topics in Germany these days. One of the alternatives is the hunt for a wild bear. Of course there ain’t any wild bears in Germany normally. A few of them live in Austria. One of them, called Bruno, wandered across the border and is now sneaking around in the Alps. Sometimes he kills sheeps, he robs beehives and last week he nearly caused an car accident. The prime minister of Bavaria stated that Bruno is a “Problem Bear” and a thread for the people and therefore can be shot at any time. The authorities imported special sniffer dogs from Scandinavia for the hunt for Bruno. Until now Bruno escaped every time the hunters got near him.

I saw a dog in Nuremberg and for a moment I thought that it was one of the sniffer dogs hunting for Bruno and that the bear was finally caught. But after a few seconds I realized I was wrong.

Hey Bruno, I wish you good luck for your bear future. I’m sure that there is a future even for problem bears like you. Take care.