Today the fans of England and Trinidad & Tobago and I had one thing in common: we had a problem with missing something.
I watched the game in the middle of thousands of fans in Nuremberg and tried to shoot photos whenever a team missed the goal in a spectacular way. 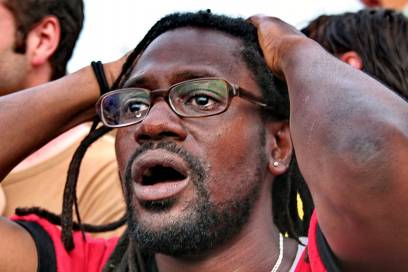 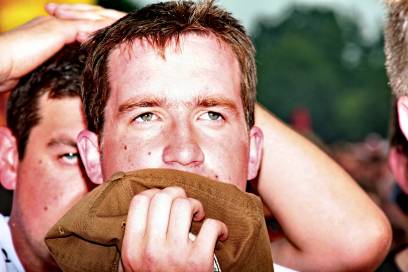 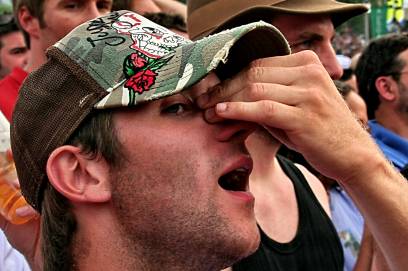 Afterwards I strolled through the city of Nuremberg. It was overcrowded and one could hear “Engeland, Engeland” singings all over the place. Great atmosphere again and the city looked very nice with all the celebrating people. Germany sells itself very well at the moment.
That was when I missed something. I walked by a man and a woman in the middle of the crowd. The eyes of the woman and my eyes met and for some reason neither me nor she was able to look away. She was tall with very short blonde curls and looked great. She walked by and after two seconds I turned around towards her and saw that she also turned around. I walked on and after five more seconds I turned around again and so did she. I stopped, she stopped, we looked at each other, she smiled, I tried to smile, she waved with her hand, I waved back - and then I walked away.
Shit! Why did I walk away? Am I totally gaga? Well, on the one hand I noticed that she was with a guy - maybe her boyfriend. Well, actually it’s impossible that the guy was her boyfriend when she smiles at other men that way. Damn. I was insomuch surprised that I wouldn’t have known what to say, anyway. Finally I’m in kind of an asexual phase at the moment and therefore supposed to avoid such eye contacts.
Afterwards I though about whether I regret my decision or not. Yes, I do. I wont see the her again and I don’t even know whether she is German or English. Chapter closed.
But missing keeps a unsatisfying thing. At least a totally unknown woman turned her head towards me and that was a very cool feeling. I can’t remember the last time that this happened.