Summer in the City

There is a song called “Sommer in der Stadt” (Summer in the City) by a german band called “Spider Murphy Gang” which sings in Bavarian slang. The song is from the early 80s and terribly old fashioned. It’s one of my favorite pieces of music for hot summer days, though.
The song is about a summer day in Munich and a guy spending the day on his favorite summer time places in the city instead of going to work.

To give you an idea I tried to translate the lyrics into English. It’s a very simple translation so don’t expect any poetry in it (the original Bavarian lyrics can be found here).

Summer in the City (by Spider Murphy Gang)

I run naked through the English Garden
sit high on Monopteros Hill.
I buy a mug of beer at the Chinese Tower
and stroll with you on Leopold Street.

I sip iced coffee at the Rialto,
and check up the young bunnies.
I think my boss has to come along without me today
because I favor to lie in the grass with you.

I run through the fountain on Stachus Square just for fun,
walk dripping wet through the pedestrian area.
I watch japanese tourists
during the play of the chimes on Marienplatz.

I go by bike to the Isar river for a swim,
lie on the pebbles on the beach.
I sit in the beer garden out in the Waldwirtschaft
extinguishing my sun burn with a mug of beer.

Why am I telling you this? I took a day off on Friday and my idea was to drive to Munich and follow the lyrics of the song. The plan was to visit as much places from the song as possible. The circumstances were very good because it’s really a wonderful summer this year in Bavaria. I enjoyed the day very much. Here is my mission-log.

English Garden
One of the biggest inner-city parks in the World - even bigger than Central Park in NYC. If I’d live in Munich it would be my favorite place. Old trees, big meadows to sit on and a very relaxed atmosphere. Although it’s a official park many people use the English Garden to practise nudism. Since the 60s no one seems to be upset. I preferred to keep my clothes on, though. 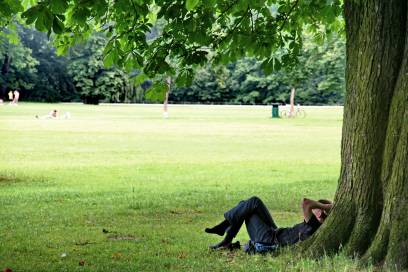 Monopteros Hill
A small hill in the park with the replica of an ancient temple on top. I lay on the slope, watched the city silhouette in the background and enjoyed the sun. 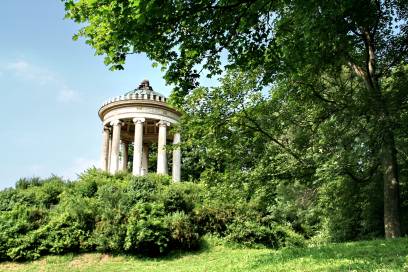 The Temple on the Monopteros Hill 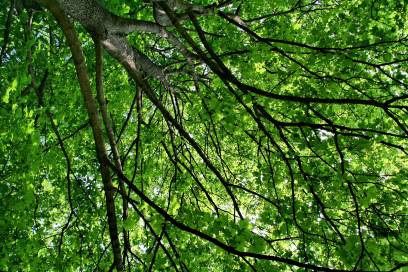 Chilling under a tree and watching the leaves.

The Chinese Tower
The beer garden around a chinese pagode is one of the biggest of Munich. For genuine beer gardens it’s common to bring your own food and to buy only a mug of beer. This makes the place much more cosy because some people bring even tableclothes. I had a nice talk with an old man painting the Chinese Tower. I liked the fact that even artists have their mug of beer beside the paint brush. For me it’s not like alcoholism but like a special way of enjoying life. I checked out several faces and came to the conclusion that everyone looked very satisfied. Not so common for Germans. 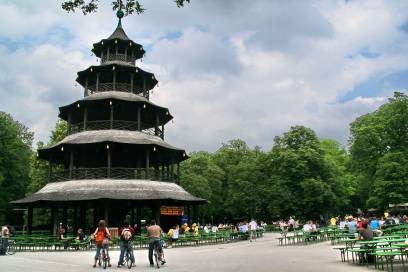 The Beer Garden Around the Chinese Tower 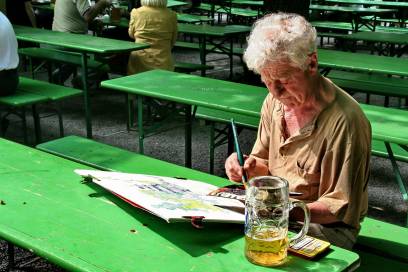 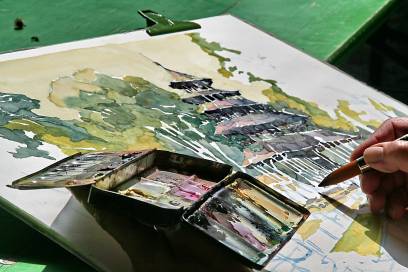 Leopold Street
A long street with lots of expensive boutiques. After important matches of the World Cup the street is crowded by party people. 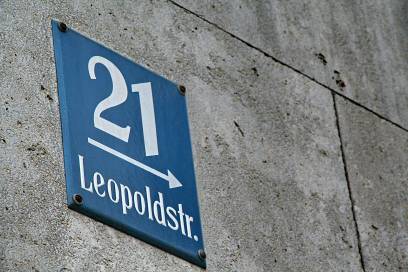 Café Rialto
It was difficult to find the café the song refers to but finally I managed it. It’s not a very special place but I liked to sip my iced coffee (although I don’t drink coffee in general). The song tells about checking out girls from the terrace of the Rialto and now I know why. It’s unbelievable how many pretty girls seem to life in Munich. It was good that I had a cold drink to cool down.

Iced Coffee at the Rialto

The Fountain on Stachus Square
Stachus was one of the most congested squares in Munich. Today the cars are in the background and there’s a big shallow fountain instead tempting to walk through. There was a man on the border of the fountain enjoying the spray of water. He seemed to love it. 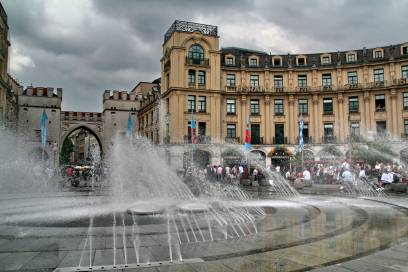 The Fountain on Stachus Square 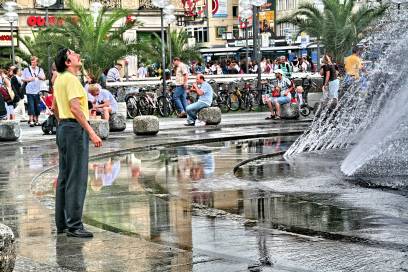 Pedestrian Area
As I walked through the pedestrian area from Stachus to Marienplatz I realized that even the very catholic city of Munich is worshipping other gods at the moment - I guess the Soccer World Cup has something to do with it. 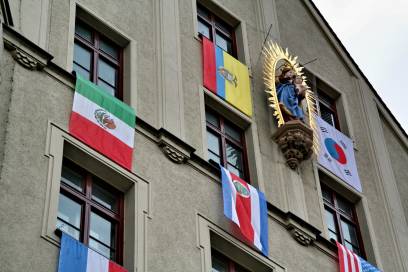 Marienplatz
The square in front of the town hall is crowded with tourists every day at noon because of the chime play on the façade of the town hall. For me the chimes were boring and I concentrated on the japanese tourists as said in the song. It was funny to shoot pictures in the opposite direction of all others. 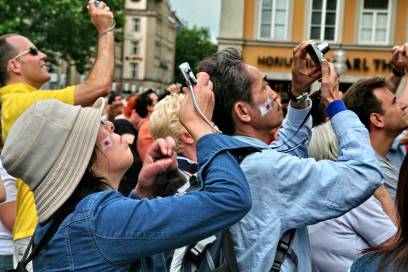 The Beach of the Isar River
That was the only one part of the song I missed - too much lyrics, too little time.

Beer Garden “Waldwirtschaft”
I wasn’t aware that the beer garden is located in the other end of the city and it required almost on hour to get there. But my mission was clear and finally I didn’t regret it. The place was beautiful. It’s located on top of an forested valley. On the one side I had a few old men playing cool Dixieland music and as soon as I turned my head I looked over the tops of the forest trees.
I had a hard fight with my giant bretzel and it was a good end point for my mission. 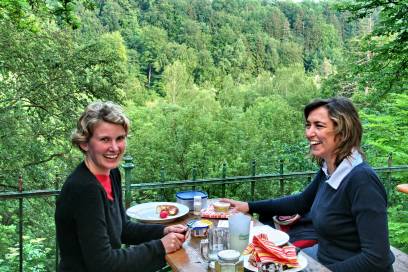 During the day it was nice to feel like a conspirator. You just look like a tourist but inside you are on a secret mission no one knows of. It was the first time that I tried to track back a song and I liked the experience.

On my way home I stopped by the Olympic Park in Munich and visited the Fan Fest. Also a very nice event but I want to spare you with details because the posting is already very long.