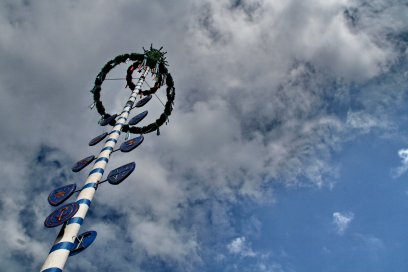 Some months ago a friend said that it’s crazy how I seem to love my region (I want to avoid the word ‘homeland’).
I denied because it sounded weird. The longer I think about it the more I’m convinced that it’s true - kind of.
The landscape of the region where I was born with all the little hills, the forests, the rocks, the small rivers and castle ruins are things that I don’t live without. I realized this not until I moved to another region. OK, my new town is only 1 hour by car from my old region but it looks different. I guess I’m not the guy for moving to other continents. Maybe this is bad - but I don’t care.

The picture shows a special tree, called Kerwa-Baum. The young men of a village rise it once a year to celebrate the the consecration of a church. Well, they don’t really care about the church but about partying all night.