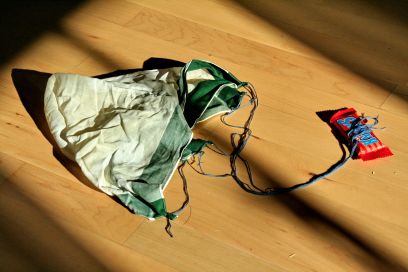 When driving long distances by car I like to listen to long features on News radio stations. Today I was disappointed because there was only a feature for kids on my favorite station Bayern 2. For some reason I didn’t change the frequency but listened. It was a true story about a little german girl named Mercedes in the times after WW2.
She lived in Berlin while the Soviets blocked the city completely. The armies from the US and the Royal Air Force started to fly food to Berlin. It was called the Berlin Airlift. Little Mercedes was hungry all the time and things like candy were just a sweet dream.
One of the US pilots, a guy named Gail Halvorsen, talked to some Berlin kids and they asked him for sweets. He answered that they should watch out the next day for a landing airplane that wiggles its wings. In the night Gail built little parachutes and attached candy bars to them. The next day while on his landing approach he spotted several kids beneath the Tempelhof Airbase, wiggled the wings of his airplane and dropped the candy parachutes out of the window. The kids cheered while collecting the candy bars that seem to come right from heaven. I’m not able to imagine how good a bar of chocolate might taste for a hungry kid in a destroyed city. Gails idea became popular among the pilots and as a result the airplanes were called candy bombers by the Berlin folks. Little Mercedes was one of them and met Gail 24 years later to thank him.

For some reason the story touched me more than I wanted.

I visited my little niche today and told her the story about the war, the hungry kids and the candy bomber Gail Halvorsen. I decided to play chocolate pilot with her, build a small parachute, tied a bar of candy to it and entered my airplane - the balcony. My niche waited down there. As soon as I wiggled my arms she cheered “It’s the chocolate pilot” and then I dropped my parachute down to the small Berlin girl. Although my niche is still very small I think she got the story about poor kids in bad times and about having hope because there are some cool humans out there.

Here is what the english Wikipedia says about Gail Halvorsen and here is the german version. 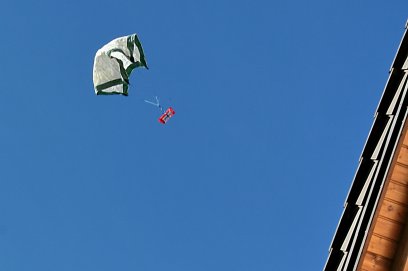