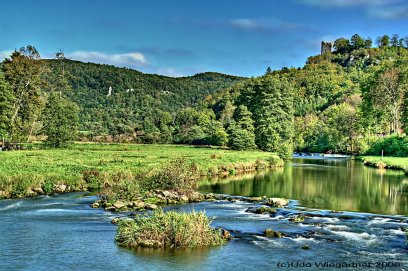 Yesterday I drove through my favorite valley - it’s called the Wiesent Valley. The autumn sun was beautiful and although I was already late I had to stop for at least a few minutes to enjoy the landscape and the view to the castle ruin Neideck. I took the chance to shoot some photos with the tripod and merged them to a High Dynamic Range (HDR) photo.
The photo above consists of 7 images that were merged together. You might say it looks a little bit unreal. It does although I didn’t manipulate the colors but only made adjustments on the contrast. Without HDR I wouldn’t been able to capture all the mirroring in the water.