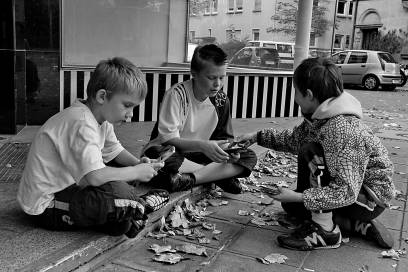 It’s great to see people doing things with absolute passion. It doesn’t matter whether it’s about driving a Formula One car, painting the Sistine Chapel or sharing Fantasy trading cards on some sidewalk in Nuremberg. I observed the three guys for a while from the other side of the street. They were absolutely dedicated to their stuff and didn’t notice me. Later on the guys told me that some of their most valuable cards ain't even unwrapped. Don’t know what the last this was I did with a similar passion.