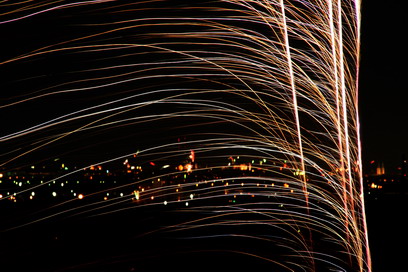 Well guys, the year is over. My objective was to track almost every day in my 2006 with at least one picture.
My goal (beside the usual blog exhibitionism) was to give myself a better idea of my 2006. I wanted this blog to see how my postings and my thoughts changed during the year. The target of 365 postings in one year was slightly missed - I only wrote 337 small articles. To be honest, I expected to loose motivation after a few weeks. Therefore 337 postings is a huge pile for me. I guess I never kept posting without the positive feedback of some of my friends - and of some strangers that visited the SADellite by coincidence.
The small counter on the right side says that 9266 persons visited my blog during the year. Almost 10000! Unbelievable, isn't it? I'll share some of the statistics with you the next time. Some of them are quite funny.

What did 2006 teach me? Well, I think at least the year was good to learn how to live alone.
My personal highlights of 2006 were the weeks of the soccer World Cup in Germany during the summer. I still can see the black/red/gold spirit if I close my eyes. Furthermore I had the change to travel quite a bit in 2006 - Austin, New York, Chicago, Egypt and my road trip across Germany.
A learning of my private life was that I'm now even more aware that I have some very good friends and how important this fact is.
But in summary I didn't like 2006 much - neither the private year nor the business one.
I'd give 2006 five out of 10 points.
So f**k off 2006 - I'm done with you!

I don't know whether I will keep posting on a daily basis but publishing some of my photos together with some stupid thoughts is still fun for me.

Oh, by the way: The photos of this posting were shot during the turn of the year on Trash Hill near Nuremberg. I walked up there to be alone but approximately 50 other folks had the same idea. My first try of shooting fire works. Damn difficult. 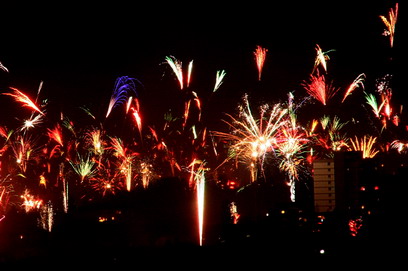