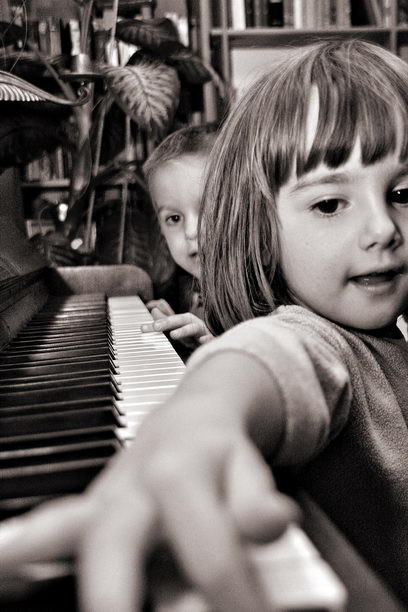 Is there any doubt whether all kids like to make noises using a piano? I guess not.
As a kid I never understood why one needs black keys because there were already so much of the white ones.
I still remember the moment as the big sister of my friend Schneider told me that one can make much nicer noises by pressing 3 special keys together and called it "chord". Schneider and me played chords for a long long time until his mother threw us out because she couldn't stand our "music" any longer.

I like that flying-fingers-thing on piano players when they play that fast that my eyes ain't able to follow.
Last time I saw this was in December at the concert of Anne Clark in Nuremberg. The keyboard player Murat Parlak was absolutely stunning. He was sunken in his own world and his music seemed to be his only connection to our world.

Here is a video from that tour that I found on YouTube. The sound quality isn't very good but one gets a good impression of Murat Parlak (I like the part starting at 03:30 best).