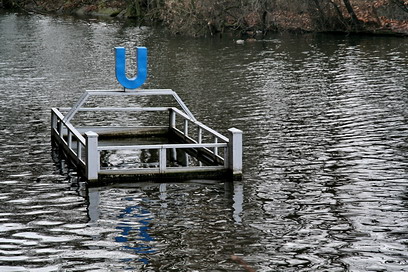 During a Geocaching hike in Berlin I found that entrance to the Underground. It was in the middle of a small river.
A funny thought that you have to swim to the entrance, dive down to your train and hold the breath during your ride to the office.
In business meetings you would attend always in black - in black neopren.
The ticket inspector would have a hard time because no one would understand him. "Could I see your ticket please" would sound like "blubb bluubbb blubb blubb". And if you have no ticket you can always say: "There was this big fish (probably a pike) and it ate it".
The drug dealers would no longer deal with drugs but sell air bubbles.

The sunken underground station was an art project called "Vertriebene Entfernung" and was created by Dirk Edwin Krechting in 2005.
Posted by Kosmonaut at 16:33