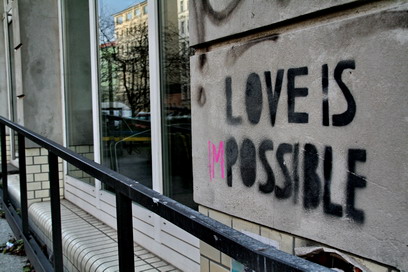 A few days ago I saw a photo on one of my favorite blogs. It showed a sentence sprayed to a wall using a stencil.
The sentence sayed "It's only Love - Give it away".
These stencil things are very fascinating for me. Not only that I love sprayed messages in general, it's the fact that there are probably a lot more copies of that sentence because the creator made a stencil for it.

It remembered me of a photo I shot in January 2007 in Berlin. Also a sprayed thing, also with stencil and also about love.
I liked the fact that someone added a few characters to it using a crayon. It changed the meaning completely and I wondered whether the crayon guy was lovesick or freshly divorced or just realistic.
My only hope is that the stencil guy created more of his sentences than the crayon guy was able to invert.
Posted by Kosmonaut at 00:24