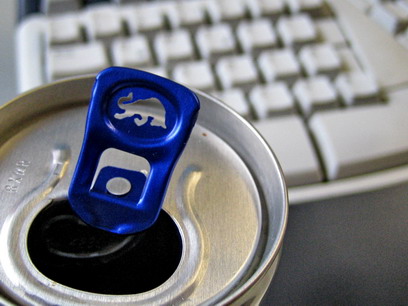 During the whole lunch my colleagues talked about Gummi Bears. No idea why. But all of a sudden I could almost smell Gummi Bears in my mouth. I didn't care about my vegetarian lasagne in front of me any longer. Only Gummi Bears counted.
On my way back to the office I stopped by an fuel station and bought a can of Red Bull. For me it smells like liquid Gummi Bears. Ice cold Gummi Bears. Absolutely delicious.
It was not that easy to deal with all the caffein in my blood during the afternoon but it was worth it.
Do you know the Pawlow dog? A scientist named Pawlow made experiments with a dog in the early 20th century. He rang a bell and fed the dog afterwards. After a few days the dog started to dribble only by the sound of the bell.

I felt a little bit like that dog. Someone speaks of Gummi Bears and I dribble for Red Bull. What kind of a human am I?

I already wrote about Red Bull in last October. My life goes in circles, doesn't it?
Posted by Kosmonaut at 00:42