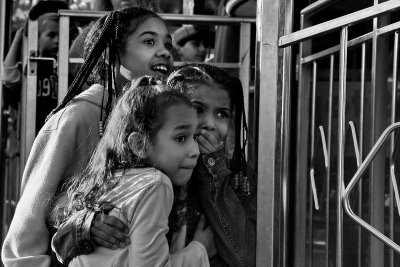 
I saw the three little girls at the fun fair in Nuremberg. They were standing in front of the haunted house watching the carts coming out of the dark.
Everytime one of the carts with the monster faces appeared, the girls were frightened to death and amused simultanuously.
I watched them a long time and enjoyed the rapid changing mimics.

Why do we like to be frightened?
Posted by Kosmonaut at 00:11