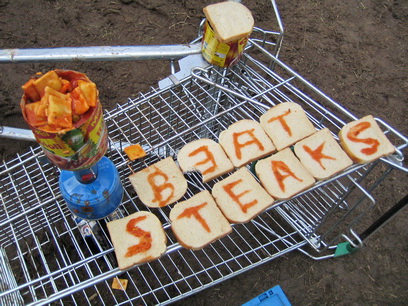 When I feel like writing I really have to do it. Instantly. Sometimes it requires some improvization regarding pen and paper.
Last Saturday I attended a concert from a Berlin band called "Beatsteaks" during the Taubertal Festival 2007 and it was the best one since ages. Even facing the fact that I'm relatively tall I was concerned about getting enough fresh air because of all the jumping people. Really awesome.
The next moring on the campsite during an luxurious lunch on an orphaned shopping cart this writing talkativeness appeared and all I had was some toast and the sauce of my Ravioli.
A lot of the passers-by stopped for reading the "memo" and said something like "great concert, wasn't it?".
Well folks, that's what I wanted to say. Mission accomplished.

If you want to know how the Beatsteaks sound like try [this].

More of my food-writing can be found [here].

PS: The neighbour from the tent beside our lunch-site ate a corner of the toast slice with the "E". I apologize for this.
Posted by Kosmonaut at 19:14