Stories Behind and the Fox 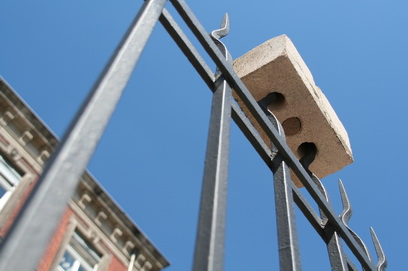 Sometimes I see remarkable things. Things that I don't understand at all. What bothers me in such situations is the fact that I will probably never find out what the heck was going on.

Last weekend I saw an iron fence and a stone on top. Just one single stone (I could tell you that the German mason jargon calls it "17er" and that the correct name is 3DF) but I had no idea why someone placed it on top of that fence.

When it comes to such a situations I usually recite a sentence from Lord of the Rings - one of my two favorite sentences of that book. It's about a small fox that saw the travelling Hobbits sleep in the forest of the Shire.
I looked for it in my English version of the book for the sentence:

"There's something mighty queer behind this". He was quite right, but he never found out any more about it.

Two weeks ago during the Taubertal Festival I saw a slice of ham sausage on the road. I said to my fellow "You know what? I'm sure there's a story behind this slice of sausage and probably we'll never find out more". As far as I remember I even told my fellow the story with the fox from Lord of the Rings. Aaand - I shot a photo.

And to my/our great surprise we did find out more! Half an hour later we walked by a car full of girls (yes, of course it was a car full of girls). It was stuck in the traffic jam on it's way to the camping ground. The girls asked us about the remaining waiting time. We chatted a little bit and for some reason I told them about the slice of ham sausage we found. I really don't know why I tell a group of girls such a pile of crap. The girls started to cheer instantly "That was us. We marked our way." And as a sign of proof the threw a new slice of sausage out of the window.
I was speechless.

I don't expect from life to explain me the background of all the small riddles. It's quite the contrary. It makes my life more valuable if it stays unexplained to a certain extend. But sometimes - sometimes it's great to lift the curtain and understand the how and why - Even if it's only ham sausage. 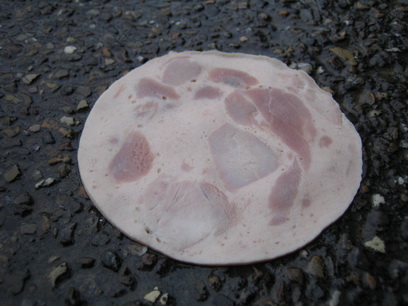 PS: I really think I will never find out more about the stone and the fence.
Posted by Kosmonaut at 23:38