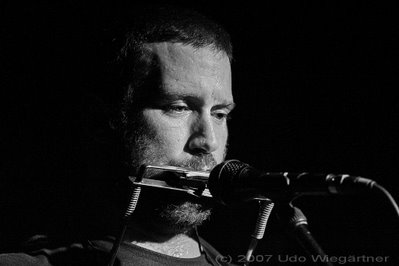 A friend and I still stick to our rule of visiting at least one live concert a month. The gig for September was performed by one of our favorite German bands called Muff Potter.
Well, Muff Potter did ok but I wasn't squealing with glee. They seemed to be tired or bored or both.
Like the last concert of Muff Potter in Erlangen the supporting act was really great for my ears. The name of the guy was Chuck Ragan and he's usually involved in a band called Hot Water Music.
He played a solo concert and I think the crowd cheered louder after his concert than after Muff Potter.
Well, and now I have his new CD and a T-shirt with his name on it.
I doubt that I ever get to old for wearing band T-shirts - even if it gets embarrassing.

I had my camera with me and decided to shoot only black/white photos instead of converting the stuff afterwards. It always gives me a completely different sense for tones and lighting. Unfortunately it didn't prevent me from shooting almost every photo very blurry. This is one of the very few focused ones.
Posted by Kosmonaut at 23:27