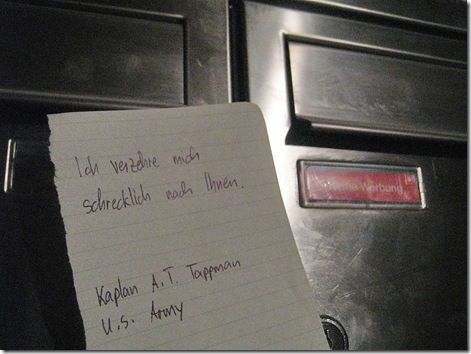 One of my favorite books is "Catch 22" by Joseph Heller. It's main character, Yossarian, is a officer of the U.S. Army during WW2. One of his duties is to censor the letters the men of his squadron writes to their families. He gets bored by this stupid work and invents some ideas to make censoring more interesting to him. He starts by blackening all adverbs or adjectives in the letters he has to process. On the next day he censors all text but "ae", "an" and "the". Finally he perfects censoring by making all text black but "Dear Mary". On the border of the letter he adds the words:

"I yearn for you desperately. A.T. Tappman, Chaplain, U.S. Army

A.T. Tappman was the name of the squadrons priest, a humble man who runs into some slight turbulences by this letter.

I love this chapter of the book very much.
A few days ago I saw a row of letterboxes in a house and suddenly it was clear to me that this could be a job for Yossarian.
I wrote the message mentioned above on a piece of paper and looked for a appropriate letter box. There was one that  obviously didn't belong to the apartment of a woman or a couple but to the one of a single man. Of course I had no idea who this man was.
A few second later the man had a message von chaplain Tappman in his mailbox.
The friend that was with me yelled at me telling me that I'm nuts but I didn't care much.
Call me an 12-year old kid having very childish ideas but I really like the imagination of the man thinking about this strange message from the chaplain that yearns for him.
I left the house smiling.

Yossarian did a lot more stupid things in "Catch 22" and I already have a few more little projects in mind.

Thank you Yossarian - you rule!