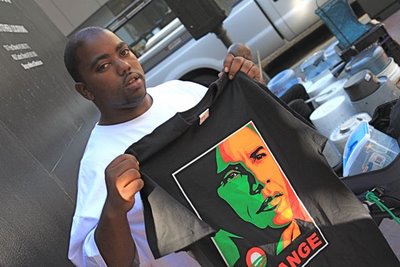 The elections for the new president of the United States are only a few days away and it is very interesting to me to observe the whole thing directly where it happens - in the US.

I was surprised that I didn't see a single portrait poster beside the street with Barack Obama or John McCain on it. In Germany there are big displays with grinning photoshopped maroons all over the place when it comes to election.
Here I only saw little signs with 'Obama / Biden' or 'McCain / Palin' in some courtyards of private homes. They have the same colors for both parties and there's not even the name of the party on it. Obviously the name of the party isn't needed because in the US it's only about Democrats and Republicans and I don't know whether there are parties like the 'Naturgesetzpartei' (Nature Law Party) or the 'Grauen Panther' (Grey Panthers, a senior party) in the states.
In Germany every party have stupid slogans on all posters like 'Deutschland zuerst' (Germany first), 'Sozial ist was Arbeit schafft' (social is what creates employment) or other wisdoms like that. Here it's just 'McCain' - bam - done. Only on some Obama signs it says 'Change'.
Actually it reminds me of some of the homeless people that asked me for 'some change'.

San Francisco seems to be occupied by the Democrats because there are little booths with Obama buttons and shirts on the streets but not a single one for McCain. An ex-colleague from San Francisco told me that the city is quite liberal.
The parties sell little merchandising things in the streets to raise money for the election campaigns. For me it would be unthinkable to buy a T-shirt with Guenther Beckstein on it (ok, that guy is history now) or a button saying 'I vote for Roland Koch'.
I talked to the guy on the photo above and he was very passionate and convinced by Obama.
He made me doing my first political statement in my life: I bought a button with 'Obama 2008' on it. It is now on my backpack. 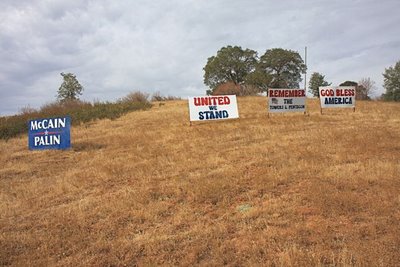 The countryside seems to be not that clear. If one simply counts the signs in the gardens it is McCain country. Having a McCain right beside a sign with 'Remember the Towers and Pentagon' and 'God Bless America' looked so strange to me that I had to stop my car an take a photo. Again: Unthinkable in Germany.

One week ago two girls addressed me in the streets showing me some forms. They worked for a school project and wanted me to register for the election. Of course they stopped their attempt after I told them that I am not an US citizen. We had an interesting conversation afterwards about the election processes in Germany and the US. They were very surprised to hear that in Germany it isn't required to register for an election because you get your registration card automatically via mail.
To me it sounded awkward that every US citizen has to register for the election just to be able to perform one of the most basic rights like voting. If one wants to prevent as many people as possible from going to the ballot booth that's the way to go.

Right now it seems as if Barack Obama leads the polls with double digits. I really hope he will make it. Eight years with an Republican president are more than enough although I have to admit that even John McCain seems to be a much better choice than the current president. But that's not that difficult, is it?
Posted by Kosmonaut at 23:25