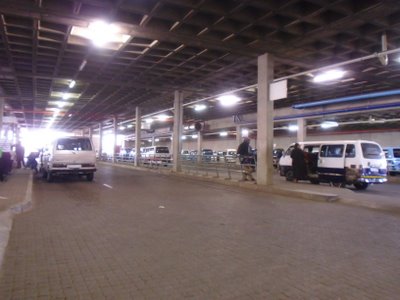 One thing I love about travelling is the little difference in mastering the all-days-life. Every big city might look similar on the first glance but as soon as you start exploring you might struggle with a lot of small hurdles.
Let´s talk about public transportation. In Johannesburg there are literally thousands of white mini vans as a kind of inofficial collective taxis. You jump in and some other new passenger gives you some coins. You add your own coins and hand the money from passenger to passenger towards the driver and yell something like ´five eight fifty one nine´. This means that five passengers want to pay eight Rand fifty and one has to pay nine Rand. It took me a while to figure this out. I never understood how to find out the price.
The passenger beside the driver is always the one that has to deal with the change (regardless if he likes it or not). Some minutes later your change is wandering back from passenger to passenger to you. If you want to jump off it´s inpolite to say ´please stop´. The correct phrase is ´short left´ or simply ´after robot´.
The most struggeling thing is that none of the white vans has a sign with the destination on the outside. You stop the van with a gesture. But be careful, just waving your hand might be wrong because every gesture means a different destination. Lifting one finger means ´Please stop if you drive to central Jo´burg´, one finger down means something else, fingers crossed means Soweto, showing four fingers means Auckland Park and so on. If the driver stops after he saw your gesture you know that he is heading towards your desired destination.
The maid of my guesthouse explained this to me because otherwise I would have been completely lost.
Oh, I forgot to mention that most of the vans have very loud african music and most of the passengers bang their heads during the ride. Very funny.

Now let´s have a quick look to the public transportation in Brazil. No african music, no guestures but big busses with the destination printed on the outside. Good, just as in Germany. 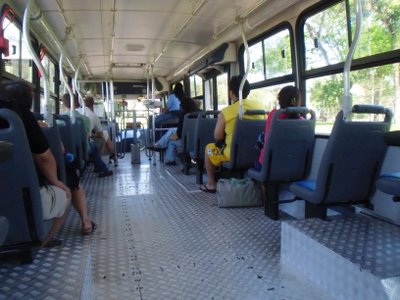 Well, not really. You can stop the bus by waving any gesture but it will not stop if you want to get off. In Germany we have little red buttons inside the bus and you show your wish to stop by pressing them. I found not a single button in the whole bus and needed one more lesson of ´learning by observing´. I saw a passenger pulling on a wire that run under the ceiling of the bus.
Well I noticed the wire before but thought that it was simply the cable for some loudspeaker mounted in the lazy brazilian way. I wouldn´t have dared to pull on a speaker cable.
It turned out that the cable is connected to a switch indicating that someone wants the bus to stop.
In addition there are little turnstiles beside the man collecting the fares. Every passenger has to pass this torture tool. All (and I mean really all) turnstiles in all of the busses are very very narrow and hard to twist. I am not very fat and was hardly able to enter. I always felt pity (and a little bit of fun) whenever a thick person entered the bus and fought with the turnstile for several minutes with a line of several more passengers waiting behind. Why the heck don´t they use bigger turnstiles?

More differences to come.
Posted by Kosmonaut at 21:27