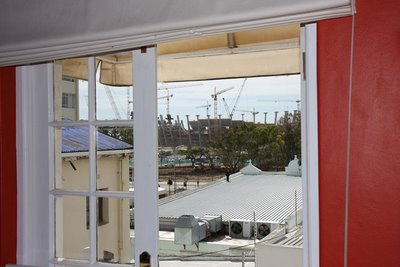 From the window of my hotel room in Capetown I had a nice view to the construction site of the soccer stadium. They build it completely new for the Soccer World Cup 2010 and it's located directly on the ocean. Actually the stadium has to be ready next year for the Confederations Cup.
I saw the construction sites in Soweto and this one in Capetown and I really doubt that the South Africans will make it in time. It looks like complete chaos from the outside. A few weeks ago Sepp Blatter, the boss of FIFA was here and according to the newspapers he was pleased by the progress. I think he probably was simply not that scared as half a year ago.
Well, it only depends on the definition of 'done'. Something will be declared as 'finished'.
Posted by Kosmonaut at 03:08