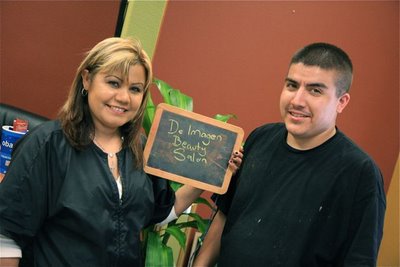 This posting is about the same place as the last one - the city of Merced in California. If I continue with this slow pace I will never finish posting about my trip.

Almost every day I have a new 'first-time' event during my trip. This time it was the first hair cut outside of Germany.
I was hesitating several days I went into the challenge. The thing that made me reluctant was the fact that I had no idea how to explain in English the way I wanted my hair to be cut. In German it is sounds like
'An den Seiten und hinten mit der Maschine auf 9 mm und oben gerade so lang dass ich es mit Gel noch etwas durcheinanderwuscheln kann'.

What the heck is the English word for 'durcheinanderwuscheln' (hints are appreciated)?

The sun was shining and I was realizing that I am a tall blond warrior and not a mouse and that it is completely stupid not to dare to go to the hairdresser just because I was missing the word for 'durcheinanderwuscheln'. It is even more ridiculous because there's not that much left of my head to be 'durcheinandergewuschelt'.

It turned out that the woman in charge had no idea about the English Word for 'durcheinanderwuscheln', too, because she was from Mexico and her English was not much better than mine.
Well, in addition she had no understanding about how long '9mm' would be and I was still struggling with all inches, yards, ounces and all the other funny units.
Tough start, wasn't it?
After a while she just started cutting and ignored my instructions with a grin on her face.
This was the moment when I realized that probably even my hair dresser woman in Germany doesn't care about the technical sounding cutting instructions from me and all the other male customers but just cuts the way she thinks look best.
As a customer you probably have to use phrases like 'die Spitzen sind schon etwas angegriffen' or 'Volumen' or 'durchgestuft' to impress a hair dresser. How is it working on you, girls out there?
(Remark: Together with a friend we once almost convinced a slightly drunk girl that my friend was a professional hair styling artist just by dropping words like 'stufig' and 'conditioner'. This is a special greeting to the 'Friseurmeister aus Ibbenbueren').

My trip is full of important enlightenments as you see.

The name of the woman was Maria and we had a very nice conversation about Mexico, Germany and the global costs of hair cuts. We were both surprised about the huge differences in price. A haircut in Mexico is 2 USD, in USA 10 USD and in Germany I pay 20 USD for the exact same thing. Maria told me that this little fact helped a bit to smoothen her opinion that all Europeans are incredibly rich if they have to spend 20 USD for a hair cut.

Of course it was not possible to avoid the topic 'soccer' (although I am an absolute soccer idiot) and the subject turned to the World Cup 2006 in Germany. Maria could remember watching the first game of the Mexican team during the World Cup on TV and we both were excited when I told her that it was in my city of Nuremberg and that I was outside the stadium with all the crazy Mexican fans.
I told her that I even have one of the photos I took that day of two Mexican fans framed in my living room. If you look closely at the photo of my apartment [here...] you can see a piece of the photo of the Mexicans in the background just behind my head.

We both were impressed by the fact that we found a connection between us - a moment back in the summer of 2006 were we both enjoyed the same vibes created in my home town. I look forward to the next time I look at the framed photo back home - it will beam my back to a small beauty salon in California.

I liked the way I looked after Maria finished her work and she and her husband even acted as models for one of my chalkboard photos.

If you ever had the urge for a hair cut in Merced, just go to 'De Imagen Beauty Salon' and greet Maria from me.
Posted by Kosmonaut at 07:52