Farewell and Aloha to Hawaii

Yes, I have to admit I watched a (free) performance of Hula girls with flower neclaces, leaf skirt and florals in the hair. Cute, isn't she?

Actually I posted far more stuff about Hawaii than I indented to and I could post much more - for example about Joe's Love Chili, about the missed Big Wave Surfing Contest, about the homeless guy, about the ride in the stretch limo I almost got for 5 dollars or about the guys on the photo below.

The first days I almost hated Hawaii because of all the very touristy crap but in the end I loved it because it was easy to escape the hype. I hung out with so many lovely people and I saw so much natural beauty on these islands - enough to preserve a special place in my mind for Hawaii.

To prevent you from getting even more bored from Hawaiian stories I will travel on to New Zealand with the next posting. 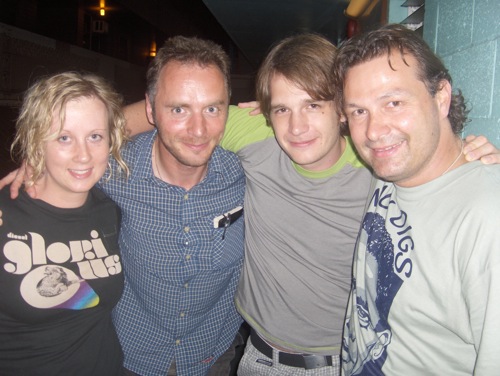 I spent my last evening in Honolulu with three funny guys. There's a special story related to the young couple on the photo and my chalk board. I am quite sure I will tell it in a future posting when it comes to chalk board tales in general.
Posted by Kosmonaut at 22:47 3 comments: 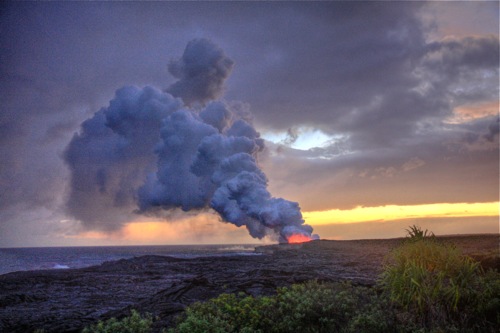 Probably a good vacation isn't perfect with at least one perfect sunset. I am right, ain't I?
This time I was able to "pimp" an already impressive sunset with a glowing cloud of steam.

There is a big 'river' of glowing lava flowing down the slopes of one of the volcanoes into the sea. It's forbidden to get close to the flow because of the toxic fume and road barriers block you several miles in front of the lava flow.
Some guys in my hostel told me that it is possible to get at least a bit closer by driving on a closed road and walk some distance. It is not as illegal as it might sound but you need the right directions because for obvious reasons there are no signs saying 'Toxic Lava Flow 2 Miles'.

Well, I got my directions, fetched my torch and drove towards the south end of Big Island.
I don't know why but for some situations you just remember the music you listened to. This was one of them and my iPod stumbled into some stuff from the German Punk band 'Vivos o Muertos'.

All of a sudden the road ended because it was covered by lava and a whole army of signs warned me with a lot of variations of 'enter at you own risk'. It was possible to drive on the lava for one more mile - it felt more or less like a bumpy normal road. I ended up in a kind of parking lot and walked the last mile to the shore.

Although I was on my own I was not alone. Some dozens of people also knew the spot for watching the lava flow sunset. I didn't care much for them.

I was sitting on a lava stone right above the shore and the lava flow was approx. one mile away.
The actual lava wasn't visible but the cloud was. Every time a big chunk of glowing stone dropped into the water the cloud glowed red like the gigantic version of these stupid IKEA lamps. Seeing this red cloud in front of the red sky was enough to capture my senses for 2 hours until it was completely dark and almost all the people were gone.
One more time nature managed to impress me with full force.

I hopped back through the darkness using my torch and during my drive back to Hilo I thought about perfect moments and that in some of them it is not necessary to have company - even if it is a kitschy sunset on a tropical island.

PS:
The photo is a HDR image and calculated out of 3 single long exposure shots. You might say the colors look a bit over the top but reality was much more colorful - far beyond the capabilities of any computer graphics card.
Posted by Kosmonaut at 06:02 1 comment:

The red thing is no cloud but the Mauna Kea volcano illuminated by the very early morning sun. It looked so out-of-this-world so we had to stop and marvel the colors.
(Click on photo to enlarge)

A German girl named Heike from my hostel in Hilo was desperately looking for a companion for an advanced hike up the Mauna Loa volcano. All guide books stated that one shouldn't do that hike alone under any circumstances. Actually I felt it a bit above my personal limits but I agreed to join her because it was one of the reasons for my visit on Big Island.

We got up at 05:00 AM and drove up the Saddle Road to an Observatory where the track started. It was hard to find the spot because there was not a single sign. One more praise for the Lonely Planet and its descriptions. Without the guide book we would have been lost. 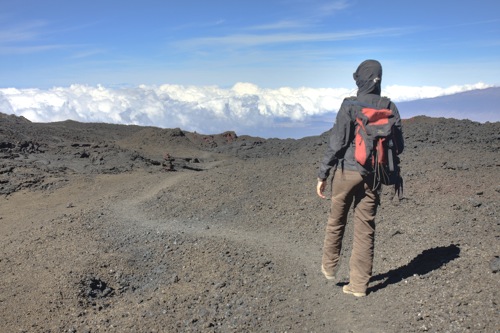 Walking in thin air at 4000m on steep lava slopes isn't a common thing for me. It felt very adventurous and great - although very exhausting. The wind blew very hard up there and it was cold cold cold. Fortunately I wore literally all clothes I had with me - including my scarf from South Africa and my hat from Canada (I am a location-dropping brat, ain't I? ;-)). 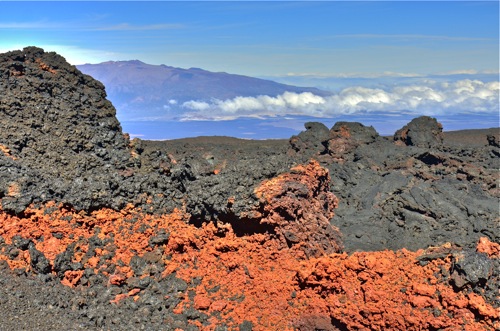 Lava Colors. The mountain in the back is the Mauna Kea volcano with the best observatories in the world.
(Click on photo to enlarge)

The landscape was more than unreal. The clouds were deep below us, the sky was very very blue and the ground consisted of many shades of red and grey. 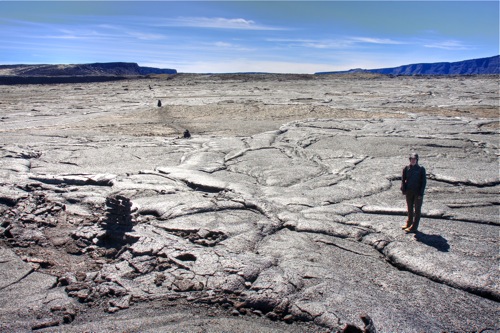 Finally we made it to the rim of the crater and climbed down for having lunch sheltered from the wind. The crater erupted in the 1980s and it felt a bit scary to walk on lava bubbles that very liquid stones just some decades ago.

We saw only one single human being in the distance during the whole day. Complete loneliness at its best.

Heike having lunch inside the crater
(Click on photo to enlarge) 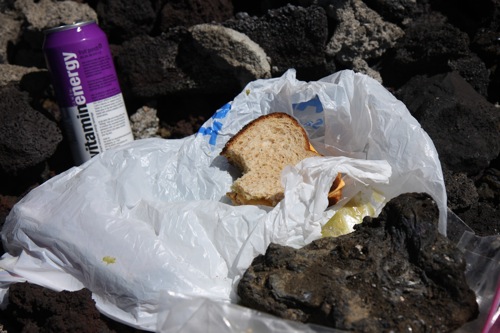 Volcano lunch with Vitamin Water, Toast, Avocado, cheese, tomatoes, onions and cookies. I was very proud about my talents as a chef.
(Click on photo to enlarge) 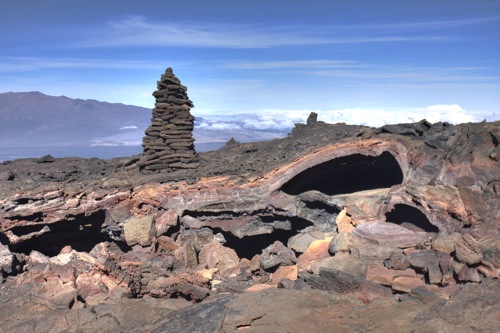 One of many lava bubbles. Sometimes one could even hear a hollow sound when walking on the lava indicating a lava tunnel below ones feet.
(Click on photo to enlarge) 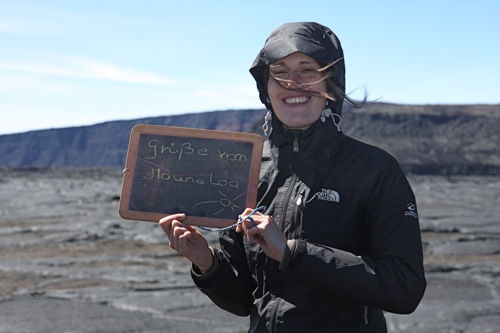 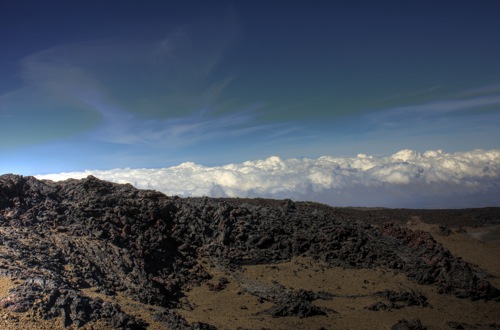 Back down into the clouds
(Click on photo to enlarge) 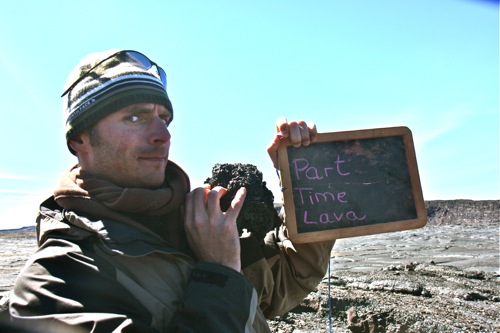 We arrived back down at our car late at afternoon and I was really done. The perfect final chord of that brilliant day were the very strange glimpse of the hostel guests back in Hilo. First I didn't realize why they stare at us but then I got aware that we still wore scarf, hat and thick jackets. Stuff like that isn't that common in a beach city on Hawaii where the official attire consists of bikinis and Flip Flops.

Hey Heike, if you read this: Thank you for a great day!

In 15 minutes I go to Brazil again. It's time for the annual Samba Festival in the little German city Coburg and I already looked forward to it for several weeks.
It is one of the weekends to realize that even Germans can bubble over with lust for live.

PS: Last time I listened to Samba it was late at night in Sao Paulo in the bunk bed of a small hostel. A Samba school was practising nearby and sleeping wasn't really possible with a battalion of drums as neighbours. I am so damn lucky for getting the chance to hear such noises. Life is good.
Posted by Kosmonaut at 14:40 No comments:

This pile of feet started their journey through life only a few years ago. Isn't it exiting to imagine what paths they will be walking on many decades from now?

As a child I had no idea about the direction my feet are heading to. Actually I still don't know. No idea whether this is good or bad.

How about you? Did your feet already tell you about their way?
Posted by Kosmonaut at 21:27 4 comments: