This time I want to share one of the most impressive encounters of my whole trip with you.
This posting will be a hard one because I will try to explain something that wasn't seizable - it was only a click in my head - well, actually a constant clicking. Even if I'll fail to explain, you may at least get an idea about how much meeting some people touched me.

I was heading north on the south coast of the South Island. It was late afternoon and I was looking for a place to stay for the night. The hostel I had in mind was fully booked and I literally stumbled upon a sign saying 'Olive Grove Lodge' instead.

The Olive Grove Lodge was a tiny hostel in an absolutely magnificent garden. Looking back it was the most comfy hostel of my whole trip.

I was the only guest that time and the owner Kim greeted me very warmly. We had a short conversation and my first impression was that he really knows how to do tourist smalltalk. But there was something more. Something was strange about that guy. Something I could not grasp yet.

After a while I was checking out the common kitchen. It was actually the kitchen of the owner's family. They shared it with their guests. I made myself a cup of herbal tea from the huge collection of organic teas out of the hostel garden as Kim explained.

He told me that his wife Lynn and he started the hostel a few years ago. They grow organic food and teach their sons at home because Lynn is a teacher. This may sound like the prototype of some kind of weird eco-family - it was not, quite the opposite. 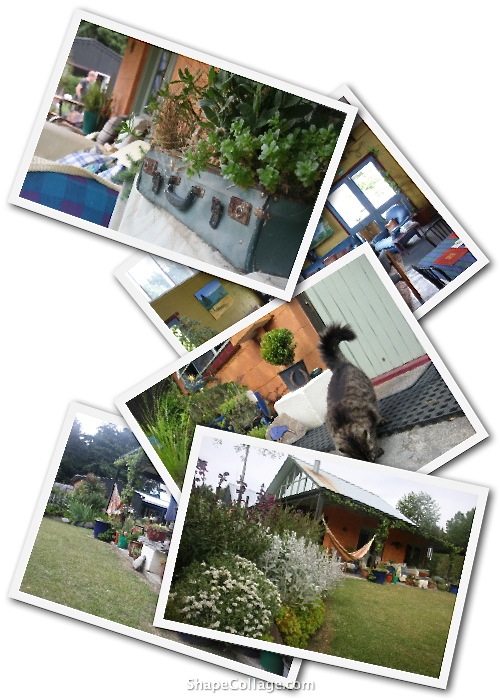 Some of my impressions from Olive Grove Lodge

Kim told me that some European girl was leaving the hostel today without paying and that such behavior is not super rare. Apart from the fact that he of course didn't like cheating guests he didn't seem to be upset.
I asked whether he had a good day anyway. His way of saying something like
Udo, it was an absolutely fantastic day' sounded absolutely authentic to me.

He told me about his day and that he likes what he does very much.

Without noticing, both of us had already left the solid path of polite smalltalk for a small hiking path leading into some thicker bushes of conversation.

I said 'Wow, this sounds very convinced. I am glad that you had a good day'. After a short pause I dared to add something like 'You seem to be sort of happy. Are you?'.

He looked at me not a bit astonished about such a question but just said 'Oh yes, I am very happy'.

You might know that I have the habit of trying to rate happiness from time to time. Yes, I know it's probably quite stupid but that's how I am wired.

My next question to Kim was 'If you should rate your current happiness with then points, how much would you give? 10 points mean "super happy" and 0 points indicate absolute sadness'.

The answer of Kim was simply '10' - uttered with the same convincing tone.

Kim smiled and said 'Yes I am as happy as I can imagine.'

I was impressed because it didn't feel like an airy statement.

Kim left and I prepared my dinner using lots of the complimentary herbs. Afterwards I mounted my slackline in the garden and did some balancing with Kim's son Joseph - a funny and curious guy. 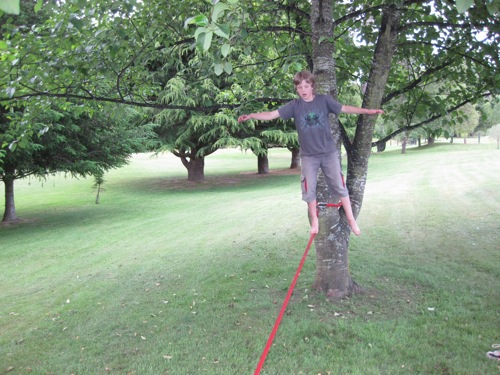 After a while Kim came back to me and said 'Udo I told my wife Kim about your happiness rating question. Do you know what she said? She said whether she could give 12 points as well because she feels 12 out of 10 happy. Udo you have to meet Lynn'.

It might sound kitschy but to me Kim and Lynn seemed to be a perfect couple. I sensed a mixture of deep respect, harmony of two strong characters and knowing that being with the other one makes oneself better.

On arriving I noticed 'something strange' about Kim and by now I knew what it was: He was happy.
He and Lynn were happy and even better, they were very aware of it and thankful to whoever.
I was really amazed. Really really.

Lynn, Kim and I had a very long talk that evening about life in general, about the obstacles along the way and about doing the right thing.

Before leaving the Olive Grove Lodge the next day I asked them to write down their word of the day for me. Because we talked about organic food as well they wrote 'You are what you eat'. But if you look closely you can see a small 12/10 in the corner. At the first glance it might seem to be just the rest of some former chalkboard scribbling but is is not and now you know the story about it.

I thought a lot about Kim and Lynn the next days, throughout the rest of my trip and even until today.
Both of them don't know how much they inspired me. Hm, maybe I send a link to this posting to them.

I hope that all of you are at least a little bit as happy as Kim and Lynn that December day in 2008. What place would the world be with more Kims and Lynns? Maybe the world IS full of them and I was simply too blind to see - yet.

Yes, I know this posting is already way to long. But you seem to be still reading, ain't you?

In my job I share an office with a guy named Tom. He and his girlfriend Dési went to New Zealand for vacation end of 2009. I gave them some recommendations for hostels and the Olive Grove Lodge was one of them. Tom got a printout of the chalkboard photo of Kim and Lynn and the assignment to give it to them in case they stay at their place.
Tom and Dési accomplished the mission and here is their report of it - uncut and in their own words. Thanks folks - you rock! 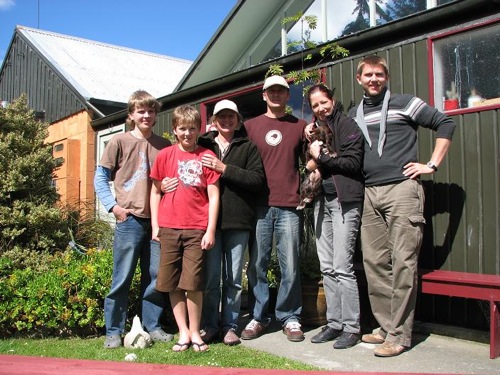 After dinner at the Speights brewery in Dunedin we headed towards Oamaru. We arrived at Olive Grove Lodge shortly after 8 pm and found our host Kim in the kitchen. After some funny complaints about us being late we promised him some surprise. He immediately asked “Who sent you here?” Obviously he often welcomes guests sent by previous guests.
I showed him a photo printout asking him whether he remembers the ‘Guy with the chalkboard’ that took the photo of his wife with the writing on the chalkboard ‘you are what you eat’.

He was totally puzzled!
Then he smiled and told us that he and his wife Lynn just talked about this guy from Germany one week ago with some guests. They were asked about the funniest guests they had. After a short discussion they remembered Udo and he was awarded to be “one of the strangest guests ever” J
He looked at the three photos I gave him, took them and went out of the house with the words “I have to show them to my wife … she won´t believe it”.

We had a nice and peaceful stay for two nights at Olive Grove Lodge – with Lynn, Kim and their two sons. Be sure to ask them for the route to the penguins and sea lions and “Fleurs Place” – the famous restaurant.

If you have the chance to stay at Olive Grove Lodge - do it!
Here is their website: http://www.olivebranch.co.nz
Posted by Kosmonaut at 19:09