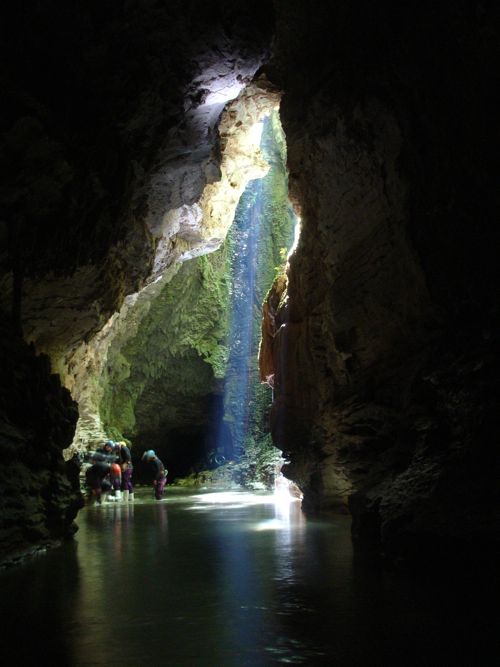 After the abseil / the boots are already filled with water *)

Now I know why I have holes in my rubber boots. It is to get rid of the water that floods in from the upper rim. Actually my boots are completely filled with water - and it is damn cold.
I am standing in the middle of an underground river in a cave wondering what the hack I am doing here.

A little while ago I drove together with two French girls and two English guys with a van through the green hills of the Waitomo area. We were equipped with wet suits, helmets, head lamps, harnesses - and rubber boots with holes in it.
Our mission was to explore a cave by doing "Black Water Rafting".
Crouching through caves and all kinds of abseiling would have been enough to get me but in addition a fellow traveller mentioned that there are glow worms in some Waitomo caves.
Glowing worms? No idea what to expect.

Our guide Bettina briefed us about our equipment and pointed out that this wouldn't be a good idea for any person struggling with vertigo or claustrophobia. 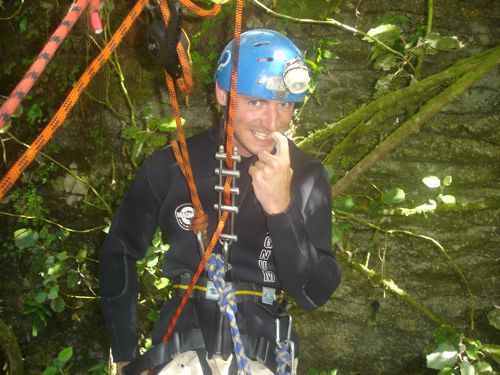 While I slowly descended down into the cave my environment changed completely and all senses noted a shift of gears.
The green hills changed into a indication of greenish light from above, the bird voices changed into the swoosh of water and the smell of fresh grass turned into that very unique cave-mixture of moisture, wet stones and soil.

All of a sudden I touched ground respectively water by landing in the middle of the stream that runs through the cave. I really had to inhale hard because the water up to my knees was very cold - and I mean 'very'. Was I really supposed to wade through that dark liquid antarctic for several hours? I guess so. 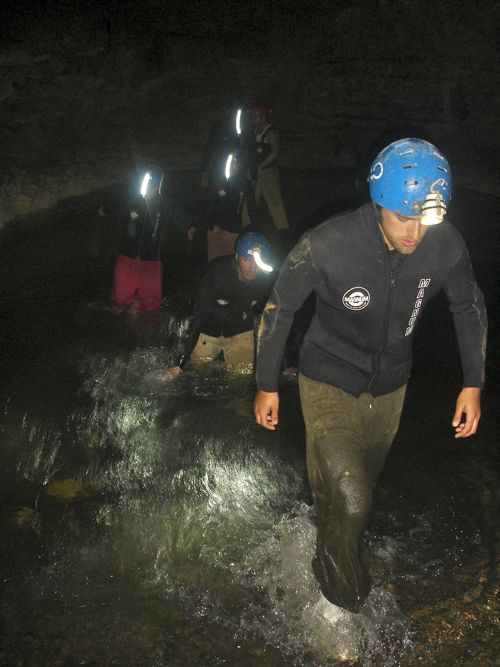 While waiting for the rest of my group to abseil I started to enjoy the scenery. Light fingers pointed down from above and when looking up there was no blue sky but a very intense green.
If you ever want to amplify a color just put complete darkness around it.

Everyone of us fetched an inflated rubber tube and we made our way up the river.
Bettina led us through a lot of small and smallest crevices and every time the water reached the next area of my body my lungs seemed to collapse. 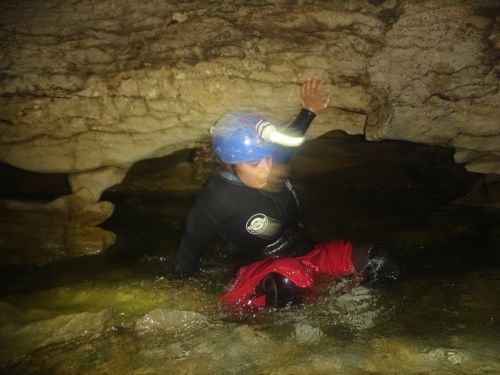 After a while we reached a kind of underworld sandy beach in a bigger hall. We sat down on our tubes and Bettina shared some of her knowledge with us.
The said that the ceiling of the hall is covered with glow worms and that they illuminate to attract insects as prey. I looked up and saw not a single glowing thing. Did they cheat on me?
Bettina asked us to switch off our head lamps. Have you ever had the feeling of being swallowed by darkness? If there is a climax of 'pitch black' this would have been the moment to use it. 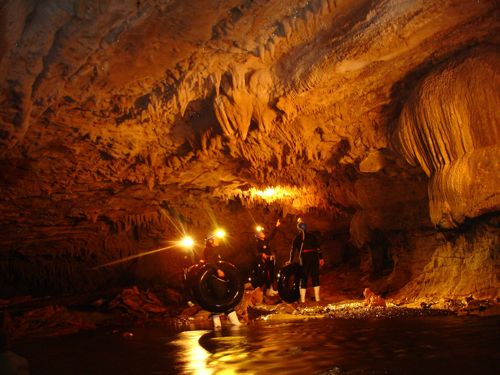 I looked up into the darkness and was disappointed: No glowing worms above me. Did they really rip me off?

After some seconds of silence Bettina said 'Shall I switch the worms on? They are sensitive to noise and I am going to make some. Be prepared."

Without further warning she slammed her rubber tube on the surface of the water creating a really loud bang.

Sometimes you can densify a whole day into just one second. On this particular day it was the second after the bang.
It was like someone had switched on a steroid version of a starry sky. The whole ceiling was covered with thousands and thousands of little green-yellow glowing spots. The fact that it was completely dark around us amplified the effect, too. It seemed that the starry night was all around me because the worms reflected even on the surface of the water.
I never saw something similar before and I don't expect to see anything like it in the future.
Only the fact that I already had goose bumps from the cold water before prevented my skin from doing it again because of the sheer beauty of the moment. 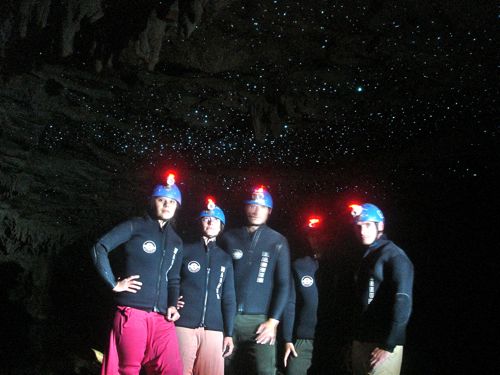 I cannot remember how long we sat in the darkness staring up to the worms but it was long - very long.

On our way back down the stream we 'embarked' our tubes and rafted down the river which was big fun and really kind of an adventure.
On some calmer parts we switched our lamps off again and drifted slowly through the starry darkness and from time to time we clapped onto the water to illuminate the worms again. Now we noticed that the whole cave was full of glow worms. 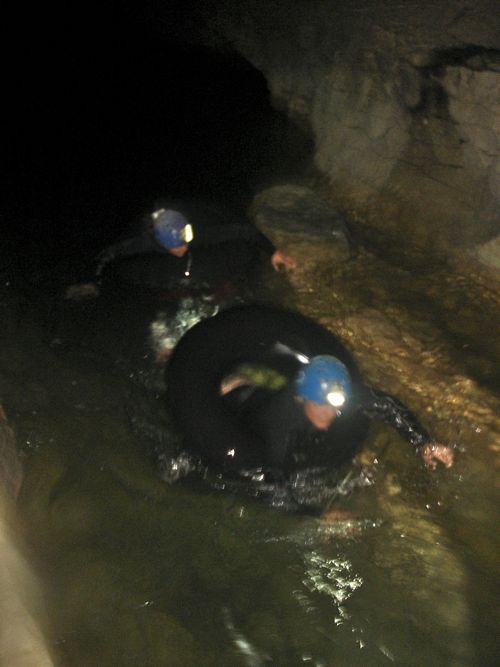 Rafting in our rubber tubes *)

Mastering some parts of the river was really like rafting. The water was quite wild as it made its way around the rocks. Everyone of us fell off the tube more than one time but for some reason the cold water wasn't a problem at all any longer. 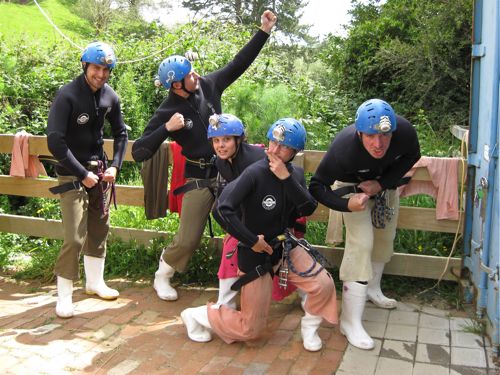 I didn't waste a thought about the climb up into the light until we came back into the entrance hall. The walls of the cave were almost vertical and climbing with rubber boots isn't very comfy.
In the end it was fun, too, because Bettina secured us with a rope.

The whole tour was one of my absolute favorites in New Zealand and the perfect combination of adventure, sight seeing, physical exercise and team thing.

Oh, I should mention that I can absolutely recommend the company I did the tour with: "Rap, Raft 'n' Rock". The groups are very small, the guide was superb and even their small hostel was cute and relaxing.

*) Photos taken by Bettina of 'Rap Raft'n'Rock' with a water proof camera. I didn't bring my own camera into the cave for obvious reasons.
Posted by Kosmonaut at 18:00