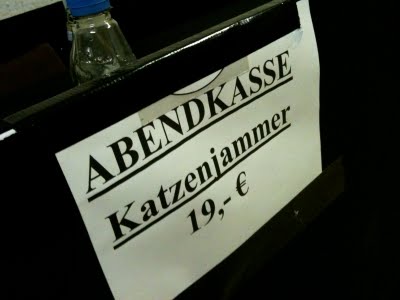 I can't believe that I haven't been to a concert for more than two months now.
Yesterday I ended this period: I had a date with four wonderful ladies from Norway.

The Band is called 'Katzenjammer' and the name is actually a German word.
Literally translated it means 'cats howling' but actually it is a slang expression for the feeling when you are hangover.

The girls made a really funny mixture of Folk, Balkan and Pop. Sometimes it sounds like a Waltz, sometimes like Soul and sometimes like the soundtrack for a circus show.

They had lots of instruments on stage and every girl played every instrument. They changed roles and lead vocals after almost every song but played with great virtuosity, though. It seemed that playing a dedicated instruments just bores them.

When you see a blond girl with flowers in her hair and a pink polka dot dress out of a 60s second hand shop play the drums while blowing trumpet at the same time you instantly think that Metallica's Lars Ulrich is nothing than a rather mediocre drummer.

Small, funny, (relatively) unknown bands with catching music - that's why I love live concerts so much.

I enjoyed the gig a lot and you really should give their music a try - for example by watching the following video.