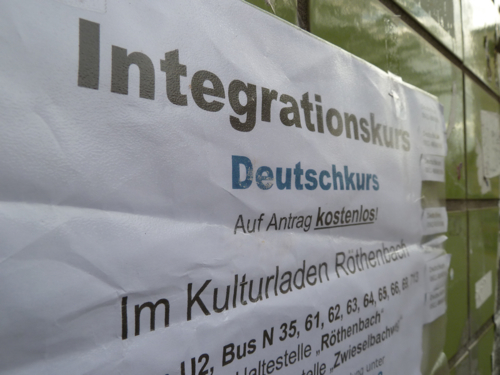 Do we do a good job when it comes to integration of fellow citizens with roots stretching out beyond the borders of Germany?
I don't really think so.
There's a lot of discussion around how to integrate migrants in Germany these days and I do have to admit that there are indeed some problems.

My city Nuremberg is also the city of a lot of people from Turkey, Russia, Kosovo, Iraq, Greek and from a lot more places around the world. A good share of them isn't really able to integrate because they can't use the most useful tool to do so: The matching language.

From my travels I know that language makes hell of a difference: It was so easy to connect to people in all the English speaking countries and a lot more challenging (up to almost impossible) in countries like Brazil or Jordan because I had no clue about Portuguese or Arabic at all.
I know that I am living a very privileged life with access to education and a good income (don't mention the latter to my boss). Knowing that, I can imagine that it is almost impossible to learn German if you are e.g. a woman from Iraq who the father has taken out of school in fifth grade and who now lives in Nuremberg as an immigrant in a traditional Arabic family.
My sister used to work as an elementary school teacher in Nuremberg and she told me that often the first-graders have to act as translators for their mums during parent-teacher conferences.
Really sad, isn't it?

The German government recently made some effort to improve that situation by forcing immigrants into so called 'Integration Classes'. Such a class last more than 400 hours and the main part of it to learn German. Other subjects of the class include to learn about the rights (and duties) of being a citizen in Germany and how to deal with civil service in a bureaucratic country like Germany.
All the learning lead to a feared 'Naturalisation Test' which caused a lot of discussion recently because the questions were considered either too lame or incredibly hard.

A few days ago I did the test online just for the sake of it and found the multiple choice questions quite reasonable.

Sample questions:
What happened in Germany on November 9th, 1938?
a) Germany attacked Poland starting WW2
b) The National Socialists lost an election and suspended the government
c) Jewish shops and synagogues were destroyed by National Socialists and their followers
d) Hitler becomes President of the German Reich

What is allowed during elections in Germany?
a) The husband can also vote on behalf of his wife
b) One can do postal voting
c) One can vote via telephone
d) Voting is possible starting with the age of 14 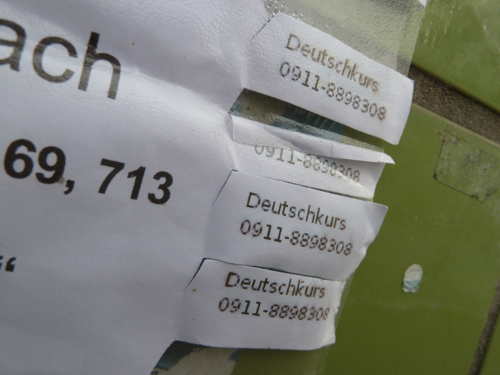 I don't know whether immigrants would be kicked out of Germany after failing the exam but I don't wanna know how many non-immigrant 'old school' Germans would fail the test miserably.

Oh, I almost forgot about the inspiration for this posting: I saw a flyer for a German class preparing for the Naturalisation Test. I really don't think it is a clever way to advertise a class for learing German in German language, is it?

PS: Just for the record: I passed the test with 33 correct answers out of 33. Therefore I won't be kicked out.

PPS: It would be great to hear how YOUR country helps immigrants.
Posted by Kosmonaut at 14:37