The second rainbow in one week. Unbelievable.
I sat at home and realized some very unreal light outside. Everything was yellow at once and the clouds looked very dramatic. It’s been a very long time since I saw a rainbow with such strong colors. A few minutes later it was gone.
You can even see the second almost transparent rainbow on the left side.

When I was a child my grandmother told me that the rainbow is made by god to please mankind. The devil sometimes tries to follow suit and creates a second rainbow. But the devil never manages to create such a big beautiful one as his counterpart above.

Well, actually I don’t believe in the guy in black neither in the man in white but I remember my grandmother’s story every time I see a second small rainbow beside the big one.
Don’t be afraid, I won’t bother you with more rainbow pics but this one was to impressive not to be shared with you.

Although I adjusted the contrast a little bit the colors were real. 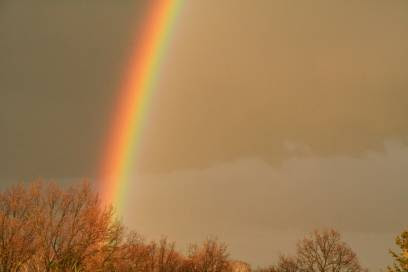