I went to the movies. The name of the film was “Das Leben der Anderen” which means “The Life of the Others”. A German movie.
It was about a country that doesn’t exist any longer - the former German Democratic Repuplic (GDR). Today that country is simply the eastern part of Germany.
The movie told about the so called STASI, the secret service of the GDR. One of the main tasks of the STASI was to spy on their own people - the citizens of the GDR.
The main character in the film was a STASI officer who had to observe a writer and his girlfriend and became more and more familiar with the people.

I liked the movie a lot although it was not a very funny one.

This posting is not supposed to spread a lot of pathetic junk but I got aware again that I got liberty for free since I was born. The liberty to shout out loud what I think, the liberty to travel wherever I want to and the damn liberty to choose between more than 13 different movies in one single cinema.

Most of my friends come from the former GDR and I will never know how it felt to be imprisoned in your own country. I don’t like everything about our western money-centered world but at this particular moment I am very grateful for the freedom and liberty I get almost for free.
I hope I won’t forget that for a while and I hope you don’t think I’m a conservative patriot. I’m not. 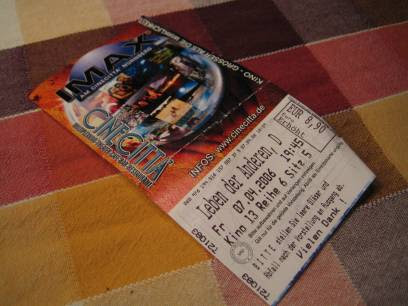