I bought a sweet snack from the little snack box in our office. One can take sweeties out and has to put 60 cent in the box. Well, at the end there’s never enough money in and the company providing us the snack box is always close to revoking it from our floor. Poor country. But that’s not the story I intended to tell.

There was this snack consisting of two chocolate bars called Hanuta. Because the soccer world cup is starting soon there were little stickers in it with pictures of the German team.
“So what”, I hear you say.
It’s not a big deal but my friends and I collected exactly the same kind of stickers from Hanuta 25 years ago. I never cared much about soccer (except on international tournaments) and therefore I didn’t know most of the players. But sharing the little pictures while eating lots of Hanuta and Duplo sweets was great.
The best thing about my little soccer players was that they didn’t smell like sweat but like milk chocolate.
Today I’m 34 years old, I don’t collect soccer stickers any more and I’m far away from the friends I used to share the stickers with when I was a child - far away in every sense.
But I tell you something: I was not able to throw the stickers away immediately. I catched myself red handed on storing the pics under my keyboard.
Well, in the end I threw them away but I thank all heavens that some things seem to stay the same forever - thanks to little soccer stickers in my Hanuta. 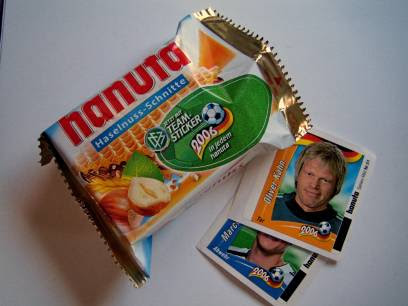