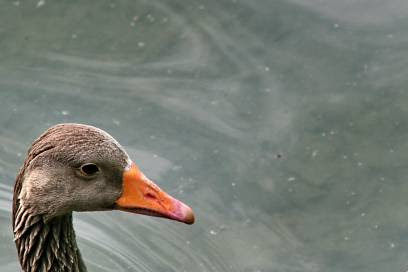 In the last couple of weeks ducks were kind of present in my photographing life.
Most of them look as they were very moody and I like that.

A long time ago I sat on a bench in a park in Bayreuth and a duck crossed the path in front of me. In the middle of the path it stumbled and immediately begun to quak. It sounded like “fu**ing park, I don’t know why I don’t quit this lousy job here”. It as very funny.

My best duck episode happened also in Bayreuth, approximately 4 years ago. I was on my way to the office by car. The traffic lights turned to red and I stopped. The pedestrian light turned to green. Because it was early at the morning no pedestrian was there. Suddenly a single duck appeared from behind a house, waddled over the pedestrian crossing and disappeared in the park on the other side. It was like it happens every 5 minutes that ducks use pedestrian crossings when they are on tour. There was only one car beside me. I turned my head and looked at the driver. He was as speechless as I was. He looked my way and both of us grinned from one ear to another. It was great to be able to share that moment with a stranger.

I think that incident started my special relationship to ducks.

A few days ago I sat at the terrace of a Starbucks in Nuremberg reading. The terrace is near the river. Suddenly a group of people from a nearby table said to me “eehm, I think the duck behind you is going to attack you”. I turned around and on a small wall there was a duck walking in my direction. Obviously it didn’t attack me but only walked by only 20 centimetres behind my head. Luckily I had time to make a photo.
Attack me? Ridiculous!. But how should the group of strangers know about my special friendship with ducks. It’s one of my secrets - a small one I only share with the ducks and you. 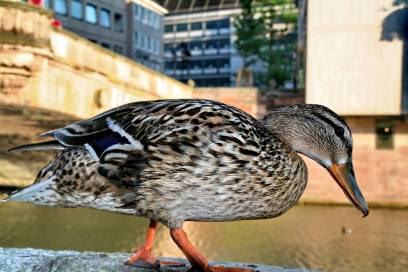