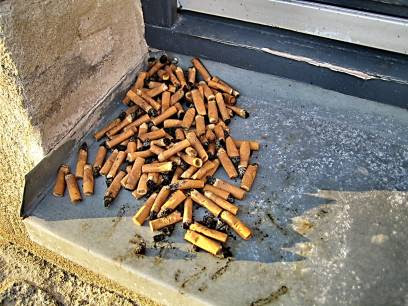 Today I found a pile of cigarette butts on a window sill while walking through the city of Fürth. I immediately walked back to car to get my small camera for a photo.
Probably some idiot simply emptied the ash tray of his car on the sill instead of using a garbage can. But what, if not? What, if there’s a whole small drama behind that butts?
Could be, couldn’t it?

This is my theory:
The window sill is near a subway station. I guess a guy had arranged a rendezvous with a girl - probably a blind date. The exit of the subway station was supposed to be the meeting point For some reason he mixed up the time and arrived two hours to early without being aware of that.
He stood there for one and a half hours, tripping nervously on place and smoking one cigarette after the other. He didn’t know whether the girl simply didn’t show up or whether she came, saw him and walked by because she didn’t like his appearance. The latter was what really bothered him. After 117 minutes of waiting he left very disappointed with a self-confidence at its all-time-low.
Three minutes later the girl arrived. She looked around and got kind of sad, too, because the guy sounded cute and promising at the phone.
I don’t for how long she waited but I’m sure she didn’t notice the small pile of cigarette butts beside her. Maybe she would have understood if the would have seen the butts.

The next time when you’re sad or disappointed look for small piles of cigarette butts near you - however they may look like. Probably there isn’t a real reason to be sad but simply some kind of mixed up emotional meeting times.