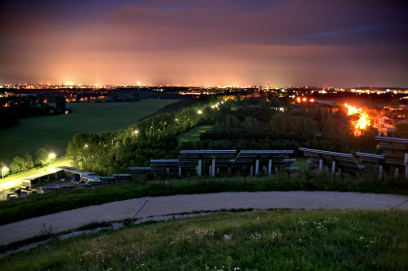 Nuremberg with some solar cells in the foreground.
Click on photo to enlarge.

After an afternoon in the office painting button graphics I needed something different to widen my mind again.
It was almost dark as I climbed a hill at the border of Nuremberg. In the flat area of Nuremberg the hill looks like a mixture of a Table Mountain and a Mexican Pyramide. It was a former garbage dump and is now overgrown and green. The people call it the “Garbage Hill”. In clear nights one has a nice view above the cities of Nuremberg, Erlangen and Fürth. Although it was no clear evening I made some experiments with HDR photography. HDR stands for High Dynamic Range. In a nutshell it means to shoot several pictures of the same scene with several exposure times. As a result you get very light and very dark photos. A special software can merge the different images by picking the best light from every single one. This enables you to capture lighting conditions that wouldn’t be possible with one single shot.
In my shots I used exposure times from 1 seconds up to 1 minute. The sources of every image were up to 12 single shots.
It was my very first real try with HDR so I’m not very satisfied with the outcome. But at least now I know that this HDR thing is worth more experiments.
Finally I want to mention that I didn’t change the colors of the photos. Only the HDR merge and some adjustments of shadows and highlights were performed.

If you want to see the Garbage Hill from space and have Google Earth installed, you can download the placemark here. 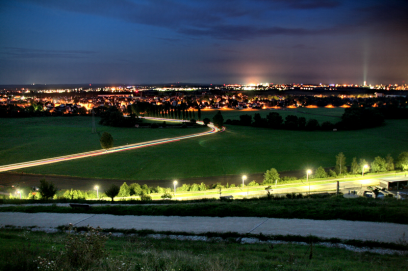 Nuremberg with the sky beam of the Nuremberg Tower in the
upper right corner. Click on photo to enlarge. 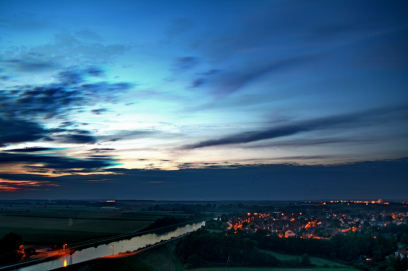 Main-Danube-Channel. I live in that direction (more or less).
Click on photo to enlarge.

Oh, I forget to tell you that it was a perfect thing to re-open my mind. I enjoyed the silence and the darkness on top of the hill very much.