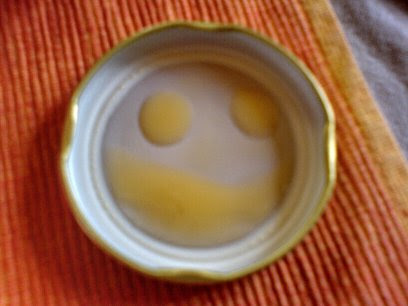 The last glass of honey I opened was looking at me. The inside of the cap was a smiling face made of honey. Who says this is just by coincidence? Blimey - that’s a face - don’t say that’s coincidence!
Since that day I’m wondering whether the glass itself is the creature and the cap is its head. It would also be possible that the honey is the creature and from time to time it forms a face with eyes to see what’s going on in the world. I prefer the latter because I don’t like the thought that I’m beheading the jar-creature every time I open the jar.
I like the changeable honey creature thing. It reminds me on the evil guy in Terminator 2. He was made of liquid metal and was able to change his form. My honey creature is quite the opposite of that evil guy. Since the day I shot that pic with the cam of my cell phone I didn’t see the honey creature again. It looks like normal honey at the moment. At the moment I think that I shouldn’t eat that honey to avoid killing the creature. Too bad that it’s a very good honey with a touch of thyme.