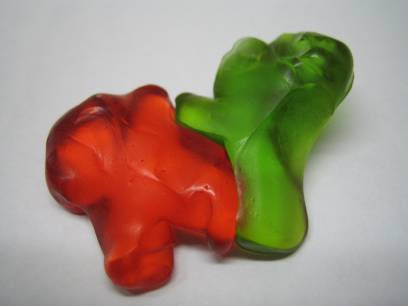 In the eastern part of Germany (the former GDR) the symbols on the pedestrian lights look a little bit different than in the western part. I live in the western part and we have simple and boring stick-figures in red and green. The eastern ones are red and green too, of course, but they wear funny little hats and this really makes a difference.
The so-called eastern-style “Ampelmännchen” (=traffic light men) are really hip and kind of cult nowadays. In Berlin there’s a shop only with products with the colored guys.
On my last visit to Berlin I bought some packages of Ampelmännchen-gums. I already ate almost all of them - except the last package. The idea was to save it for a special situation, like a valuable vine. One of those possible events was the finding of a nightly Geocache. Stupidly I forgot the gums in the car during the hunt for the geocache and I even forgot to remove the package from the car afterwards. The next day was very hot and the contents of the bag melted together to one single redgreen something. I felt sorry for the poor little guys and put the pack in my fridge to cool them down.
Well, this happened in June or July and since then the guys rested in my refrigerator. A few days ago I finally opened the bag (without special occasion). They tasted as good as always but they looked a little bit pathetic and not really like men with little hats.
But probably they liked being melted together. Actually the only thing the could expect was to be eaten without further notice and now they got the chance to transform to something visionary and maybe even poetic prior to being swallowed by someone with a sweet tooth.
That’s not so bad, is it? 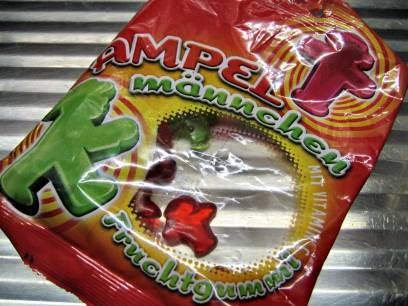