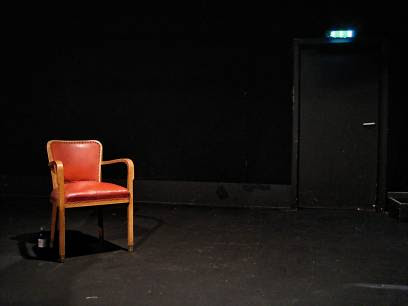 I had a great evening at the theatre. Well, actually it was not the real theatre in Nuremberg but a small blue cubicle called “Bluebox” in front of it. It only has seats for approximately 40 people.
It was not a play that was shown. A single actor appeared, sat down on a red chair and told the ancient story of the Ilias by Homer. You know, the story behind the awful movie “Troy” with Brad Pitt.
First I was a little bit reluctant because I expected a reading of the old book. But it was very funny. The guy told the story without a book or script in a very agile way with a lot of jokes, deviations and own thoughts. I learned that the war of troy was mostly about anger and sex. Weird.
I wish I had had this guy back in school as teacher for history.