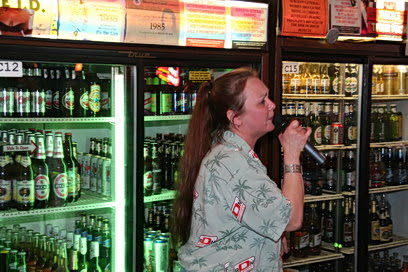 This woman was kind of a fridge DJ. I shot the photo in a club in Chicago in November 2006.
A Live band played rock songs on stage. The band consisted only of men. Suddenly a unbelievable female voice took command. I needed some seconds to realize that the lady behind the bar fetched a microphone. The funny thing was that she didn't stop serving the customers while singing some Melissa Etheridge songs.
She had several very big fridges packed with beer behind her. In 10 second intervals she opened one of the frigdes, grabbed a bottle, fetched the cash from the customer, jumped to the next fridge and did it again - and never stopped singing.
Very cool.

This was the last posting for the fridge-week project. It was very funny and challenging for me to think about fridges every day. I still have a pool of ideas left sufficient for 1-2 more weeks. But I will stop here.

What I liked best was that during the week I found three comrades-in-arms for the fridge-project spreaded across Germany, New Zealand and Iceland. Unbelievable, isn't it?
Posted by Kosmonaut at 15:57