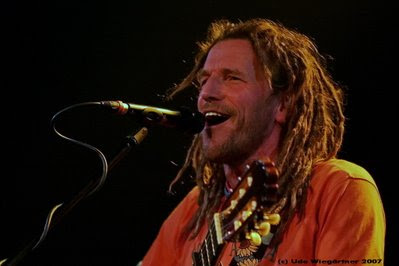 A colleague and I agreed in trying to visit a concert at least once a month. Today we attended the one for March and it's only the first day of the month. I really hope that therefor the rest of March won't be free from Live music.

We listened to a German Guy named Hans Söllner. His music sounds like Reggae with German lyrics in a very strong Bavarian accent. I don't think that the audience outside of Bavaria understand a single word. Lucky me.
The stories behind his songs mostly accuse politicians or grievances in our very compassionte society.
Hans Söllner entered the stage and instead of playing the first song he started to talk about Joints and the German Chancellor Angela Merkel (he always addressed her as "der Merkel"). He said that sometimes he forgets to play more or less completely because he talks too much while standing on stage.
Since many years he is in constant fight with the law because of some Mariuhana stuff and because some politicians sued him because they felt offended.

It was a lot of fun listening to the music while nodding from left to right.

I managed to bring the Fat Lotte (my camera) in but I had to promise the guy at the door to only shoot photos during the first two songs. You know what? I held my promise although it was a hard thing. Shooting the photos was also difficult because of my decision to shoot the portraits of Hans Söllner in manual mode without having aperture and shutter speed calculated automatically. Facing the fact that I'm not used to that yet I'm kind of satisfied. 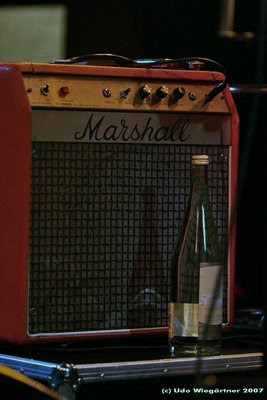 Click on photo to enlarge.
Posted by Kosmonaut at 00:07