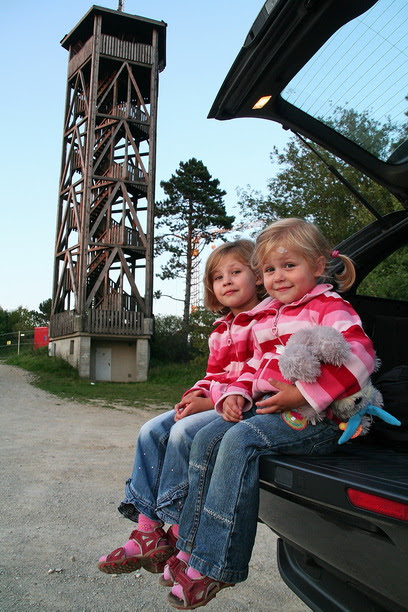 Do you see that tower? It's with the utmost probability the highest tower in the world.
Imagine two very small and young human beings and one of their hardest challenges so far.
My two favorite girls accompanied me to a spontaneous visit at a look-out. Their great-aunt was also with us.
I just wanted to climb the tower for a few sunset photos (BTW: they turned out to be bad). Actually the girls cheered "yeees" as answer to my question whether they will join me for the climb because they had no idea what a look-out is and that it's the highest peak on the planet.
The smaller girl was held back by the slightly hysterical great-aunt. She said that she's too small and there are "numerous dangers" and that the tower is shaking and the girl would throw up.
So I took the hand of the other girl and started to climb the stairway. The girl was very impressed by the height of the building and kind of reluctant but willing to do it. After 10 steps the grant-aunt screamed with a high-pitched voice out of an old Doris-Day-Movie "You are about to throw up, aren’t you, sweetie?"
My girl looked and me and said "I can't go on. I'm afraid. It's too high".
At this point in time I wouldn't have given the maximum sympathy points to my screaming aunt.
So I went back down with my disenchanted girl and my aunt said "You see I was right. They are frightened".
I was about to climb the tower on my own as the smaller girl broke free from her grant-aunt, run to me and took my hand with a very determined face. It was a perfect mixture of will and fear.
Before my aunt had the chance to start screaming we were already 20 steps ahead.
I counted the stairs loudly to distract the girl. 102 steps later we had a great view from the top and the screaming grant-aunt was only a kind of grant-ant on Speed.
The way down was easy.
Back down the small girl had a look at her older sister that made me grin very broadly. It was the I'm-way-younger-than-you-but-I-was-up-there-and-you-weren't-you-whiny-wimp-look.
What shall I tell you - the bigger girl swallowed, stumped over to me, took my hand and said "I wanna try again".
My grin went even broader and we did it. I could feel through the hand I was holding that she was slightly shivering and so I encouraged her to count the stairs with me (although the number 102 was way beyond their number-horizon).
On top she was not able to go to the balustrade but that didn't matter.
Finally it caused a see-I'm-rehabilitated-look to her smaller sister and the world was OK again.

The photo was shot 2 minutes later. I really love the pride in their faces a lot - pride because of a glorious victory over the fear facing a task that is higher than the highest tower in the world.
Posted by Kosmonaut at 18:58