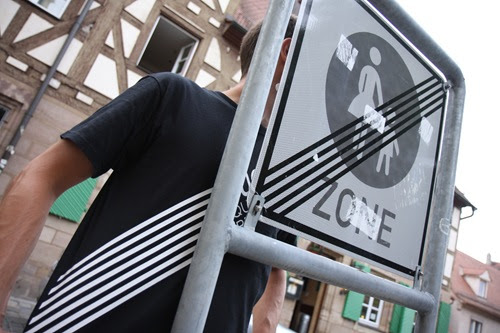 Is it a good or bad sign if traffic signs extend into reality?
If the stripes from the sign really exist it could be that the white woman or the white child await me behind the next corner, too, couldn't it?

By the way: It's a shirt from a young band from Nuremberg called "Yucca". I heard them two years ago and liked the sound. Check out their music on their  [ Myspace site... ]

Posted by Kosmonaut at 22:07 No comments: 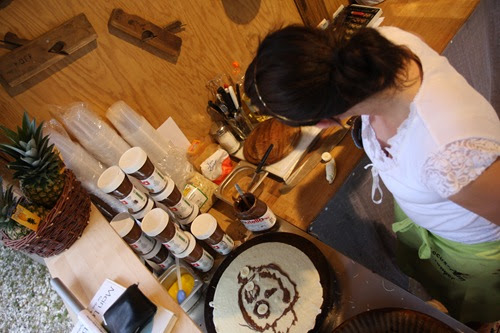 I love to eat Crêpe. My favorite taste is Nutella and bananas.
Sometimes when I order one I ask the cook whether he/she can dribble me a Nutella face on it before folding the pancake. I never succeeded so far.
The last time I asked a Crêpe-girl for a face she gave me one instead of "painting" it on the Crêpe because she looked at me as if I came from Mars. She had no idea what I'm talking about and just ignored my question.
Last Saturday in Munich I tried again, with almost no hope.

Udo: One Crêpe with Nutella and bananas, please. Oh, and could you please dripple a face on it?
Crêpe-Girl: A face? OK, no problem.
Udo: You simply say "OK"? You are the very first Crêpe-cook that don't think I'm a Marsian.
Crêpe-Girl: You know what? Sometimes I dripple faces for myself when I'm alone.
Udo: You are my heroine of the day.
Crêpe-Girl: Is it ok when I use the banana as eyes and hair?

Usually I don't eat food with eyes because I'm a vegetarian. This one was an exception.
I guess I don't have to say that this particular Crêpe was one of the best I ever ate and I'm pretty sure that the smiling Nutella face kept grinning inside my stomach.


@Blafasel: Maybe you are right with your theory that it's city related. Hamburg seems to be less "facy" than Munich.

Posted by Kosmonaut at 10:02 No comments: 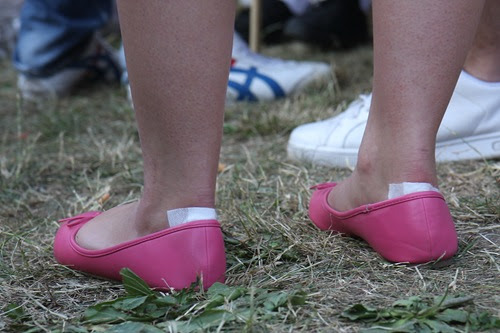 Does one necessarily has to suffer to look good?
Maybe sometimes things are bigger in reality than in ones own wishful thinking and it may result in sore spots.
You can change your nice purple shoes or try to shrink your feet.
The shrinking option might be difficult and not very promising and you really don't want to put off your brand new princess shoes.
So what to do?
If all else fails one can walk around with patches on the heels. Probably it hurts and doesn't look very princess-like but you can feel like you have beaten reality.
I guess reality pity you and lets you life your princess-patch-thing without further notice.
It's up to you to cope with it. 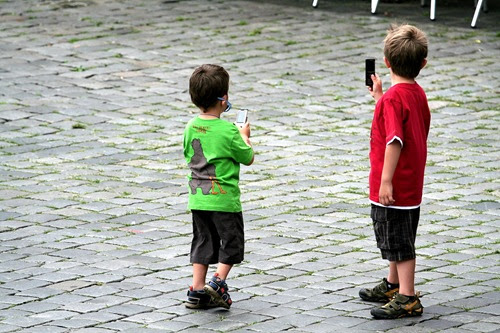 I'm really unsure whether I like little kids taking photos with their cell phone cameras or not.
On the one hand it's great whenever kids are searching for motives and trying to capture their very own world. But on the other hand I fear that their world could be reduced to the small gadget in their hands. To some extend we are already slaves of these electronic communication toys.
I hope these two boys will find the right balance for their lifes.
Posted by Kosmonaut at 17:12 No comments: 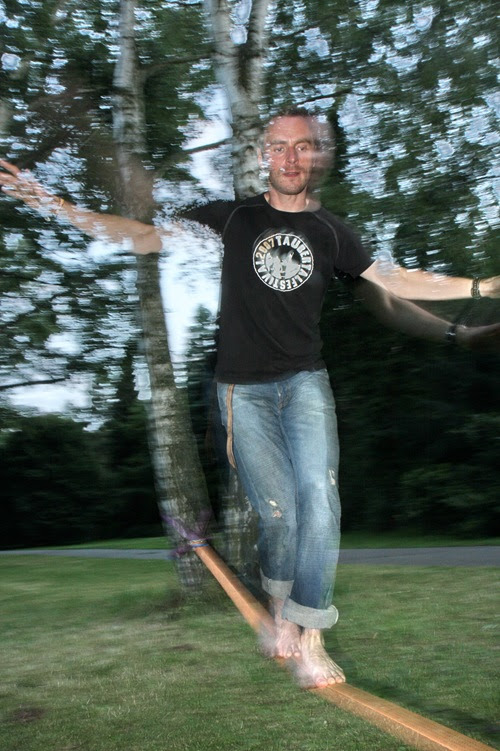 Oh my dear! I didn't know on what parts of my body I have muscles until they started hurting yesterday. I have sour muscles on my back, my thighs, my shoulders and even on my shins.
What happened?
Well, I simply did my very first tries in Slacklining.
Slacklining is a modern sounding word for balancing on a truck tension belt that is tightly stretched between two trees near the ground.
Although the belt was relatively wide I didn't think that I could stand on it more than one single second because the damn thing started shaking like hell as soon as I put a foot on it.
Together with a few friends we tried the whole afternoon and in the end we really managed to walk a 6 metre distance.
It was amazing how different I listened to my body when it came to finding balance on the belt. You have to concentrate, tense the muscles in your back and use one feet as a kind of balancing pole.
I was so excited about slacklining that I went to a local DIY store and bought a simple tension belt. It's so great to realize how simple all-day stuff can used to improve the feeling for the own body.
To bad that the guy who brought the slack line couldn't join us because he hurt his ankle by jumping off the belt last week. This is quite a difficult thing to achieve because the line is only 30 cm above the ground.
Get well soon, Master Brownwood! 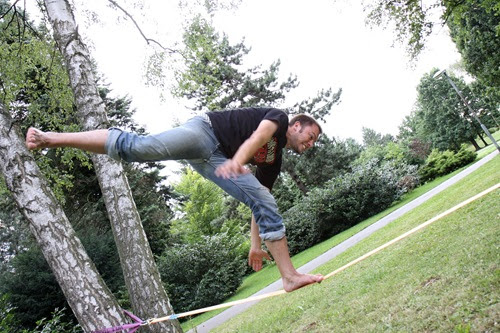 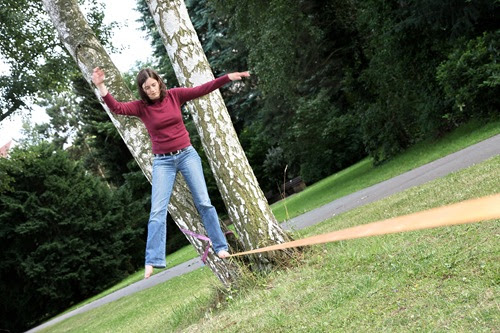 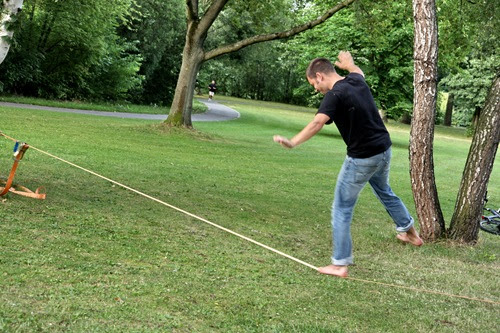 I just got two short movies from a great director called BiggerMuff showing our glamorous rookie tries. You can watch them [ here... ] and [ here... ].

Posted by Kosmonaut at 16:44 No comments:

One More Schmap Photo from Hamburg

The guys from the online travel guide www.schmap.com contacted me again because they want to use another of my photos for the next edition of their city guide.
The photo shows the old tunnel beyond the Elbe river in Hamburg.

Nice to notice that the work I did in tagging my photos and adding the GPS coordinates in Flickr helps to find my photos.

A few months ago I watched the nice little German movie "Absolute Giganten". It's one of my favorite movies and it is located in Hamburg. During a car chase the main characters hide in exactly that tunnel. I was amazed because the scene in the movie looked exactly like my photo - including the yellow light. Unfortunately I have to admit that the film was first.
[ Here... ] is one sequence of the movie that I like a lot. It's not the one with the car chase but the best table soccer game ever.
Posted by Kosmonaut at 14:00 2 comments:

Samba-City is a Place in Germany 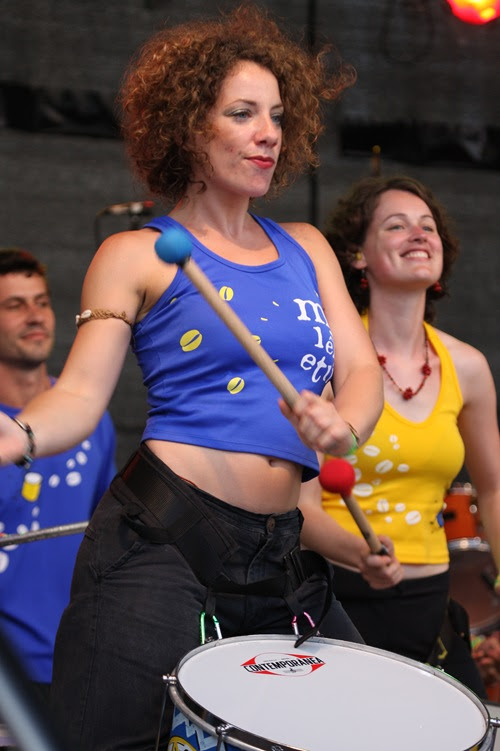 Do you know how it feels to walk around with goose flesh for half a day although it's 25 degrees warm?
You don't?
Well, go to Coburg to the International Samba Festival and I guarantee you that you will be blown away by one million horns and three million drums. At least it sounds like that.

This party is one of the absolute highlights of my musical year and it was so great that I think I have to go there tomorrow again. 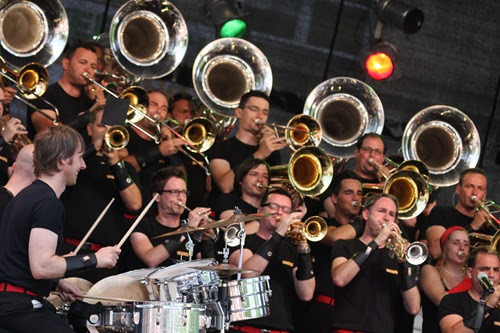 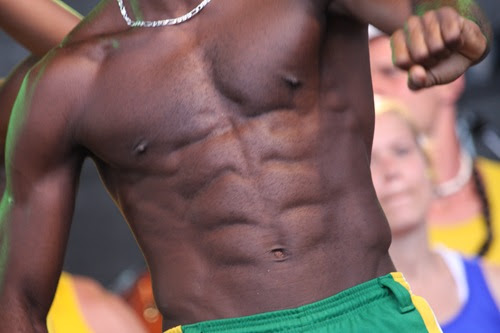 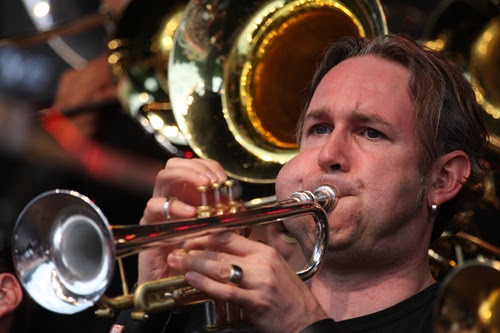 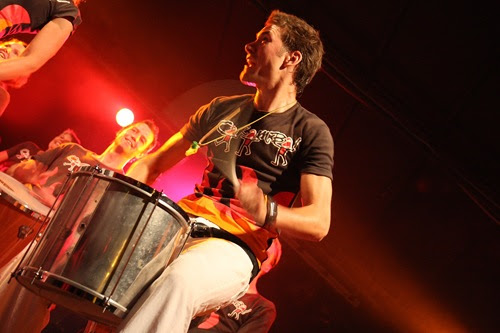 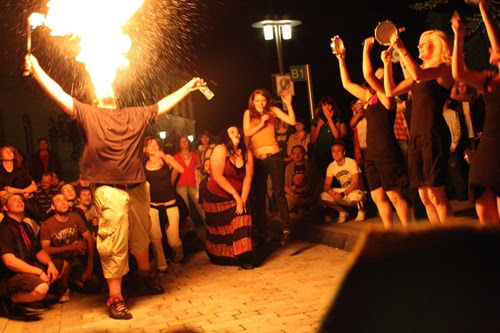 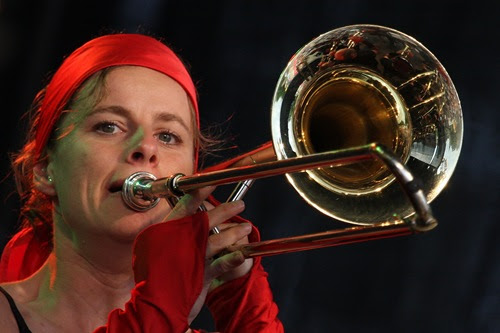 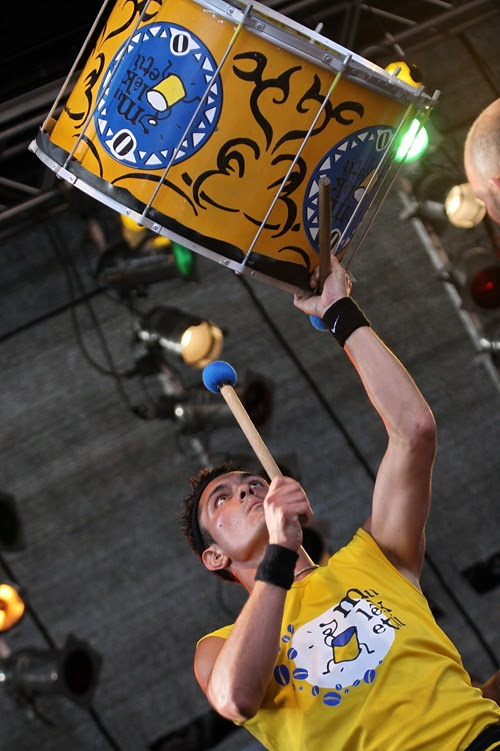 Posted by Kosmonaut at 16:59 No comments: 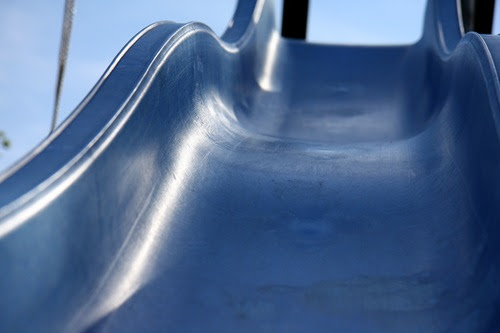 The higher the better.

What do you expect from your future? How do you want to live? Where do you want to live? How should the perfect city of your future look like?
I have no clue about my personal future city but yesterday I got an impression about how the folks in the 16th century thought about future cities.
During a walk through my current city (Nuremberg) I shot a few photos inside the Sebaldus Church. It houses the very famous grave of Saint Sebaldus. I watched it several times during the last years but until yesterday I never looked at the top of the grave canopy. To my astonishment I realized that there's a complete city up there - the heavenly Jerusalem. In former centuries the people thought that a new shining city would descend from heaven after the Last Judgement - called the new Jerusalem.
Well I do think that the current Nuremberg looks slightly different than the sculpture the artist Peter Vischer imagined.
Long tin snakes crouching through the streets, people in hurry everywhere and less green every day.
Is this how we all want to live? Damn, we should start working on the blueprint for our very own future city

The photo is a HDR and calculated out of five single shots using the software Photomatix Pro 3.

PS: Notice the colored windows in the background - they survived WW2.
Posted by Kosmonaut at 14:53 1 comment:

A full day in capital city.
My friend Daniel and I spent 24 hours non stop with taking photos - from midnight to midnight. This time it was Berlin on June 21st, the longest day of the year.
Like the last time we did such a photo experiment in Winter 2007 we'll write down all our thoughts and small adventures on www.twentyone24.de. Stupidly we were not able to write yet because our job leeched all energy out of our heads. But things calmed down and we can start now. Asa little teaser we created a 6 minute video with some of the approx. 1600 photos we shot that day.
Stay tuned for the stories behind the photos.