A Concrete God in the Clouds 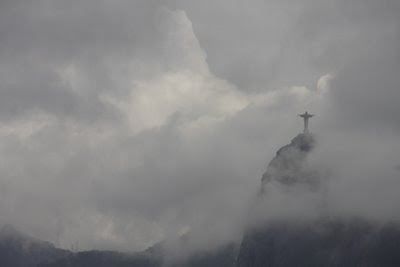 Hey, this is Rio de Janeiro. Finally. After 27 hours on the bus I made it. Actually only 23 hours were planned. The rest was a gigantic traffic jam and an inspection of our bus by the police. The buses coming from the border to Paraguay (my starting point Foz do Iguacu is near Argentina and Paraguay) are frequently used vehicles for all kinds of smuggled goods. The police checked every single bag from every single passenger (except the ones from the few European looking folks) and found - guess what - nothing. But not because there wasn't anything illegal but just because my co-passengers got a hint 15 minutes prior to the inspection and moved hundreds and hundreds of smuggled lipsticks to plastic bags and out of the bus. Obviously the bus driver was involved. I didn't know what was going in the beginning on but finally all the puzzle pieces fitted together after I talked to a Brazilian guy.

But this is not what I wanted to tell you. This posting is about a concrete god on a steep hill. I guess everyone has seen photos of the giant statue of Jesus Christ in Rio de Janeiro called 'Cristo Retendor'. It was really like the statue watched over the city.

On one day I went up the Sugar loaf and the view to the mountain with the statue on top was hidden in clouds. From time to time the mist unveiled the monument and sometimes it was like Jesus was hovering in the clouds. Magic moments.

The next day the weather was sunny again and I went up to the concrete Jesus. I'm not sure what I liked more: the stunning view over Rio de Janeiro including the Sugar Loaf and the famous beaches of Copacabana and Ipanema (where I stayed) or the nuns doing sightseeing and trying to take photos from each other in the gesture of the statue. Actually I think I liked the nuns a bit more. 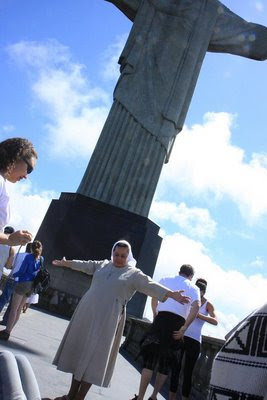 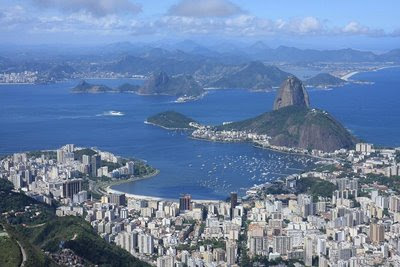 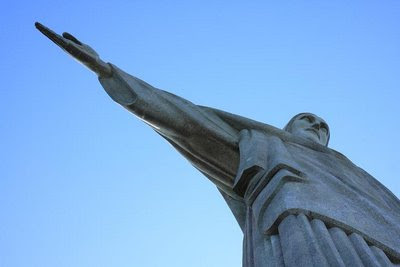 Again I was amazed of the fact that funny little animals running around everywhere. 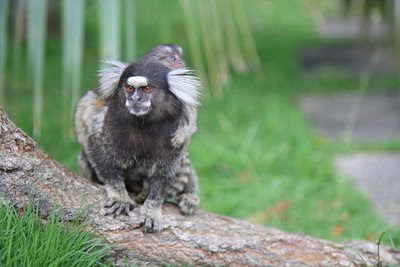 By the way: The idea to build such a huge statue came from a catholic priest in the 19th century. He requested the money from pricess Isabel but she refused. Finally the statue was financed by donations in the early 20th century (source: Wikipedia).
Posted by Kosmonaut at 05:10