Yes, You Can - Obama and Sticky Rice 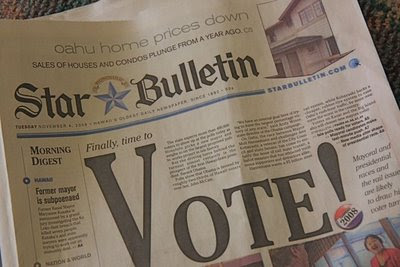 So this was election day. As I already wrote in a previous posting it is quite interesting for me to observe the whole thing in the middle of it.
It started for me today with a newspaper in the waiting hall of the airport in Oahu, Hawaii. The headline said in very big letters 'Vote!".
Actually I wasn't aware until today that I am in the middle of Obama-country because Obama was born and raised on Hawaii. The newspaper said that the people from Hawaii are for Obama 4:1.
During the day I saw some handwritten signs saying 'Vote" and the 'o' was written like the 'O' of the Obama-posters. Well, here on Hawaii it looked like an easy race for Obama.

While driving in my rented card I listened to the news in the radio all day long while the first results from the west coast states came in. Kind of funny to listen to voting results under palm trees.

OK, the US are a very big country with several time zones but it was strange for me to realize that the results for the first states where already published while the polling station were still open in the eastern states. I am sure the people in the east weren't influenced. Right?

One of the words used most by the radio speakers was 'historic' and it didn't sound overstated. 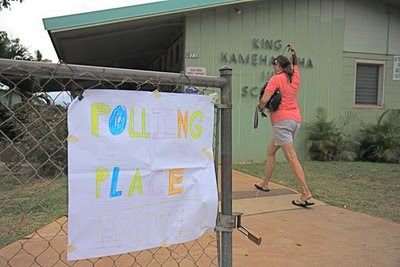 A women going to vote in a small village on Maui

I bought a sandwich in a small shop and the owner had a conversation with a customer about going to vote. They greeted each other with 'happy voting'.

Being back in my small hostel most of the folks sat in front of the TV watching the speeches of John McCain and Barack Obama live.

First of all I have to admit that the US is really good in doing stuff like these election things.
McCain did a great job in admitting his defeat in my humble opinion. Well, it was very clear that he lost so maybe it was a bit easier but I couldn't imagine such a respectful behavior in Germany. I still can remember Gerhard Schroeder after his lost the last elections in Germany - yes, I know it was much closer. 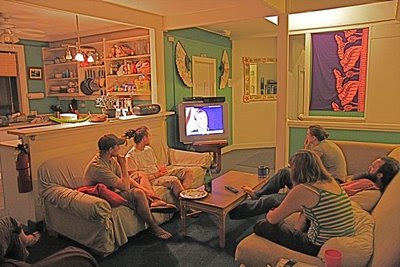 I was impressed by the way Obama addressed the crowd in Chicago after his victory. Even if it is his job to speak free and even if someone wrote the speech for him it impressed me.
In Germany such a speech would be far less pathetic but being here in the states it felt really ok - even the chapter about the 106 year old wasn't too much - but it was close. 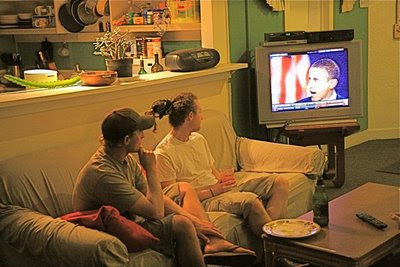 The last part of the speech consisted of a lot sentences containing the main slogan from Obama's campaign 'yes, we can' and 'yes, I can'.
This wouldn't be that important without me picking up some food for take away from the Thai place across the street.
I asked the waitress 'can I have sticky rice with my tofu' and guess what she said.
'Yes, you can'.

No kidding. I am part of all this change thing even if it's just about sticky rice.

Wish you good luck Mr. Obama.
Posted by Kosmonaut at 07:57