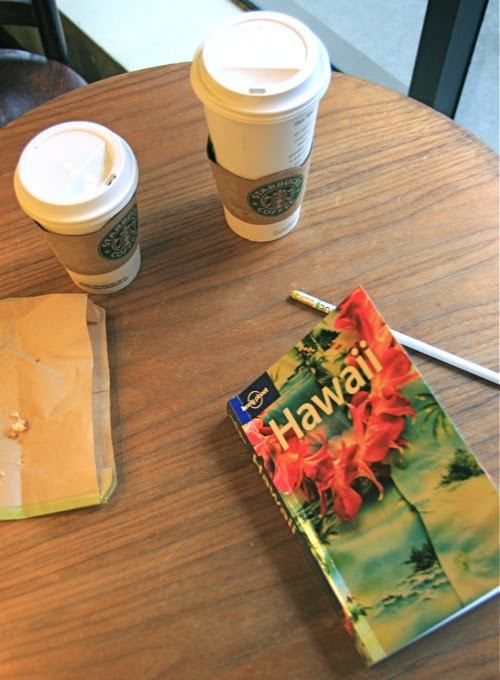 A backpacking trip without a guide book would be difficult for me. The blue Lonely Planet books gave me numerous very valuable hints about how a country works. They told me where and when buses leave, recommended some good hostels and gave advice how to avoid the main scams. Unfortunately almost every traveler relies on the Lonely Planet guide books and most of us end up in the same hostels. Sometimes it seemed that hotels or sights don't exist if they are not mentioned in the Lonely Planet.
That brought me to the thought whether a country would disappear completely when all tourists would throw away their Lonely Planets in the same second.
Anyway, this is not what I want to tell you in this posting.

Usually I refer to the blue Lonely Planet book as the 'Blue Bible' because it acts as a guidance for life and even the writing is as small as in a bible. In San Francisco I had a blue bible experience of a sad kind.

I sat in a Starbucks in San Francisco by the window and read in the Lonely Planet for Hawaii, my next stop.
All of a sudden an old homeless guy in rotten cloths entered the shop and sat down on my table. He started asking for some money but I hardly understood anything because he was talking in a very strong accent and he was lacking most of his teeth.
After some seconds two Starbucks employees appeared and asked the guy to leave in a very hard tone.
The homeless man said 'I just wanted to talk to this man. I thought he is a good man because he reads in the bible'.
The waiters almost grabbed the man in his armpits and forced him to leave the shop.
I didn't know what to say.
After two minutes one of the Starbucks guys brought me a free cup of coffee and said 'Sir sorry for this situation. Here is a free Latte for you'.

Damn, there was a homeless guy and a rich tourist and in the end the rich tourist gets free coffee while the poor guy is thrown out.

I looked at my blue bible, felt awful and stopped reading in my blue bible about places the vagabond probably never will see.

Life is very unfair in many ways and I have no idea how to deal with it.

This story is not invented. You can still the my two cups of coffee on the table.
Posted by Kosmonaut at 16:51