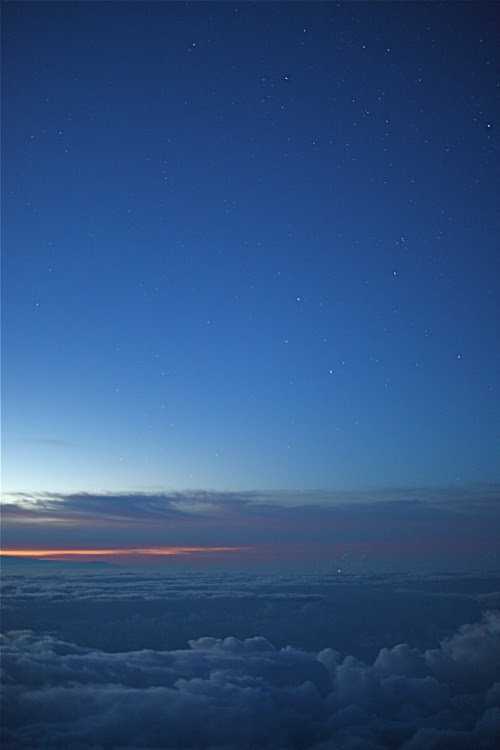 Standing above the clouds watching the colors of a new day and the stars at the same time.
Click on photo for an enlarged version.

It was the night after Election Day. If you want you can read about some of my impressions from the Election Day in one of my former postings [here].

I was getting up at 3AM, sneaking out of the dorm room of my hostel and driving to the rim of the Haleakala Crater. Someone told me that the extinct volcano area is supposed to be perfect theatre for a sunrise show. The small road was winding up in endless switchbacks and I was listening to classical music and the latest election results on the radio.
It felt a bit sad to do such a thing without anyone to share it with but I wanted to do it anyway. 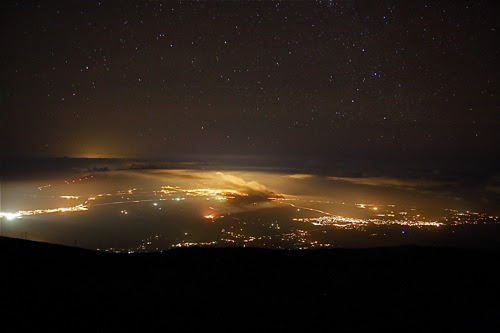 Looking down into the plain. You can see some bush fires in the centre of the image.
The exposure time of the photo was 30 seconds.
Click on photo for an enlarged version.

It was pitch black on top of the crater. My torch was somewhere in Brazil and I wasn't able to see where to walk to from the parking lot. I was thinking about the stupidity of walking in complete darkness towards the rim of a huge volcano crater.
Oddly enough I wasn't the only one up there waiting for the sun. I liked standing amongst freezing folks that got up in the middle of the night just to watch the sun. 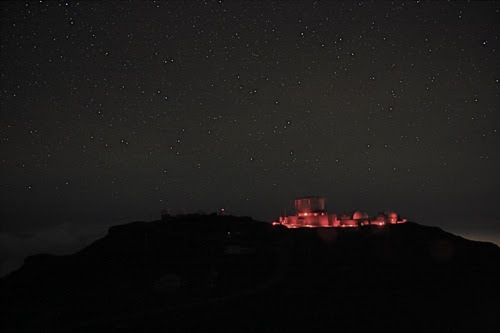 Because of the high altitude (10.000 feet / 3055m) and the clean air some of the most famous observatories are up here. This one looked like a landed star ship. Exposure time 30 seconds.
Click on photo for an enlarged version.

Simply the stars were worth getting up early. I never saw so many stars. Star constellations like Orion suddenly didn't consist of only a dozen of stars but of 500 of them. It was far more impressive that I could imagine.

After half an hour one could spot a slight idea of light in the east.
Someone said 'The crater is full of clouds'. You couldn't see them yet because it was still dark but another long exposure shot with my camera unveiled the clouds. The crater was big big big and a big herd of gigantic sleeping white sheep where sleeping in it. Probably the clouds come here every night to sleep. The term 'Clouds Rest' crossed my mind. I was speechless. 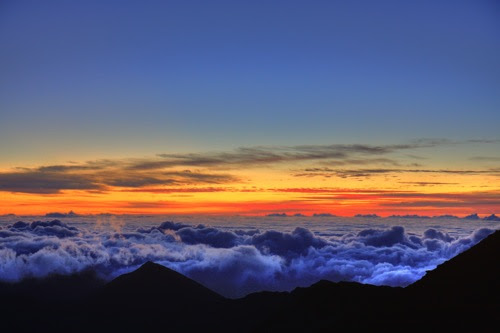 The color and structure of the clouds and the sky changed every few minutes.
Click on photo for an enlarged version.

It was freezing cold on the top of the mountain. Luckily a fellow traveller from my hostel told me to wear every single piece of clothing I own - so I did. I even brought my towel as a blanket. 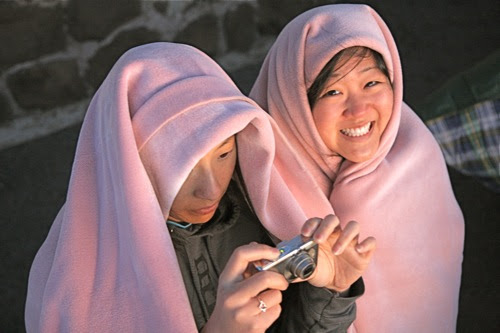 Two Korean girls standing the cold. They don't look unhappy though, do they?
Click on photo for an enlarged version.

The whole thing was like the LSD version of a sunrise you see in an airplane from time to time - a slow motion flight with the biggest panorama window you can imagine. 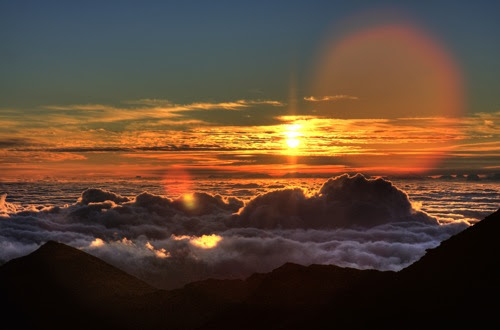 This was the reward. And this photo is just a weak version of the reality of that morning.
Click on photo for an enlarged version.

On of the best things was that it was one of the situations when you think you might feel lost and alone and it turns out that you are not.
I was sitting on a small wall beside a girl from France named Emilie. It wasn't necessary to talk much. We helped each other taking photos and just watched the day awake. 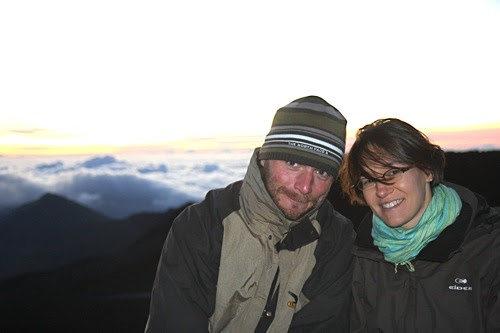 The Korean girls shot this one of Emilie and me.
Click on photo for an enlarged version.

All of a sudden I realized that the morning had finally came to life. It was only 8AM and perfect for starting a long hike down the crater. I asked a Park Ranger for some proposals and he recommended a hike called 'Sliding Sands' and the name was program. It was very exhausting to walk on the steep sandy slopes in this thin air.

The whole scene looked like Mars with small volcano cones everywhere. The clouds below me constantly sneaked back and forth into the crater. 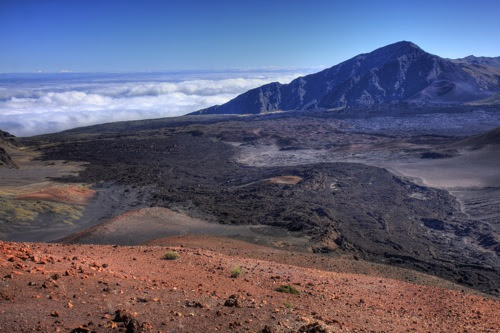 Cold lava flows in the crater, the clouds still below me and the Pacific Ocean in the background.
Click on photo for an enlarged version.

Because it was early in the morning I saw almost no one at all. It felt like I am the only human being in the crater. It was very quiet and I could really feel my mind slowing down and rest.

During my lunch break it was so peaceful and quit that I even fell asleep for an hour just by watching the clouds. 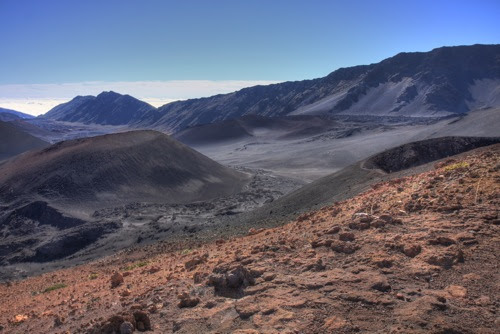 Some smaller volcanic cones inside the big Haleakala Crater.
Click on photo for an enlarged version.

On my way up I saw Emilie again. She was also hiking down. We talked a few minutes more and then continued on our own. I didn't see her again and probably I never will but I know that she was as impressed by that sunrise as I was. We still have Skype contact from time to time.

While driving back down I had to cross the clouds. The blue sky turned into grey rain clouds down in the plain. 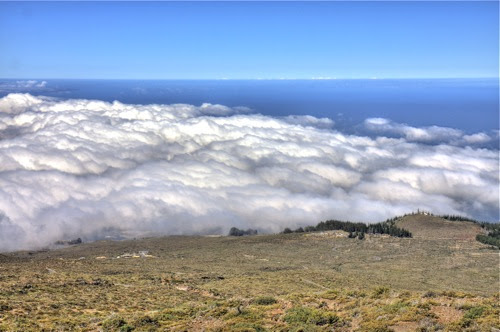 Crossing the clouds again while driving down into the plain.
Click on photo for an enlarged version.

One of the lessons I learned that day is that there's always more than you see.
You don't know what I mean?
Well, before that day I thought that Orion consists of a dozen stars. After climbing on that mountain I know that it consists of hundreds - at least.
One more example?
In the beginning the scene was a black hole for me. After a long exposure shot I realized that I was surrounded by a herd of sleeping clouds.
Whenever I think that I can't see the solution for a problem I should just think about this crater sunrise knowing that it is just about the right tools or about to climb higher to see more. I am not very good at it yet but I try to hang in there. 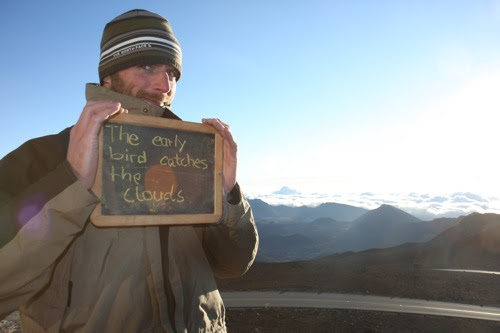 I catched them, stroked a few of them and let them go.
Click on photo for an enlarged version.

This morning was one of the most intense situations of my whole trip and it is still very vivid in my memory.
I told a friend about this sunrise and she asked me how any future sunrise is supposed to impress me after the one on top of the volcano crater. Well, I think that sunrises are not good for being pressed into Top-5 lists. Every single one is different and special. Not every one is as spectacular as the one on Maui but it is great to know that nature has no need to repeat itself - it invents new ones every single day. A lot of potential for special moments, isn't it?

You can watch the photos plus a few more of this morning at my Flickr page in higher resolution, too.
Posted by Kosmonaut at 13:32