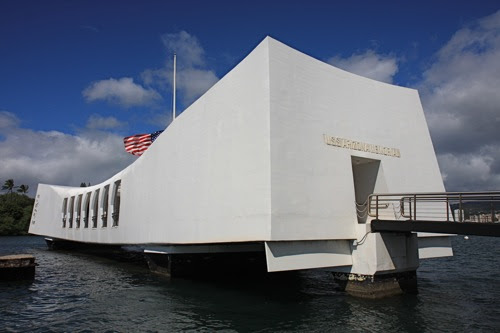 The memorial shrine directly above the wreck

OK, Oahu has nice beaches but my main goal on this island was to visit Pearl Harbor respectively the memorial of the sunken war ship USS Arizona.

I guess most of you know at least from the Hollywood movie "Pearl Harbor" about the Japanese attack in 1941. More than 2000 people died in this attack. More of 1700 of them were killed on a single ship - the USS Arizona. 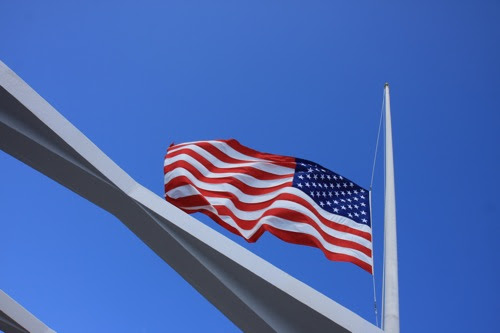 The wreck of the USS Arizona still rests at the ground of the harbor and a memorial shrine is right above the corpse of the ship. The flag on top of the memorial always fly at half-mast and as a visitor you can really feel that this is a very special place for the USA. 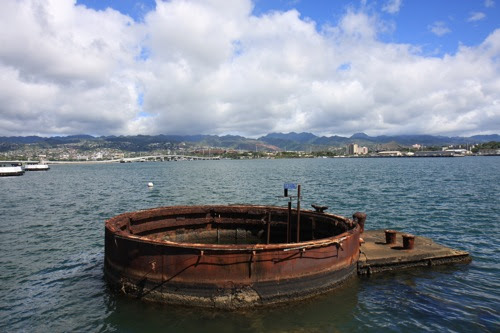 Only a few parts of the wreck are above the surface and if you look down you can see the rotten rusted grave of the Arizona. 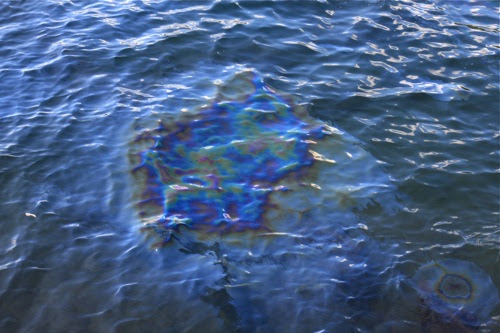 Oil Bubbles above the wreck

One of the most impressing moments for me was watching the oil film floating above the wreck. The USS Arizona is still leaking oil - almost 70 years after its 'death'. It really looked like a bleeding corpse and made it even more obvious for me that this is a place of death and grief. 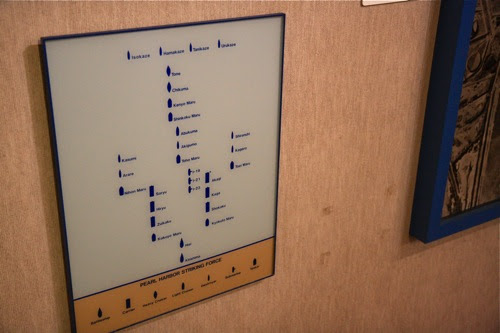 In the little museum beside the memorial I had a strange Déjà-Vu.
I saw a sign on the wall with a list of all the Japanese war ships that were involved in the attack of Pearl Harbor. One of them was 'Shinkoku Maru'. Damn, I knew this name. Even more I know the resting place of this ship because I dived it.

In 2007 I travelled to the very small island of Truk Lagoon (now called Chuuk). As a revenge for Pearl Harbor the US Air Force sank a big share of the Japanese war fleet during a big attack in 1942. This sad fact makes Truk Lagoon the No. 1 diving location world wide for wreck divers.

One of the wrecks I dived there was the Shinkoku Maru and now in this museum I was confronted with the other part of the story. It seemed like a circle that is completed now. Very strange.
It seemed so ridiculous in a sad way that attacker and attacked ended up as wrecks. Only death and pain on both sides and all that remain are tourist attractions. War is the most stupid thing I can imagine.
I wrote a posting about a dive on one of the wrecks in Truk Lagoon in 2007. It is written in German and you can have a look at some photos here. 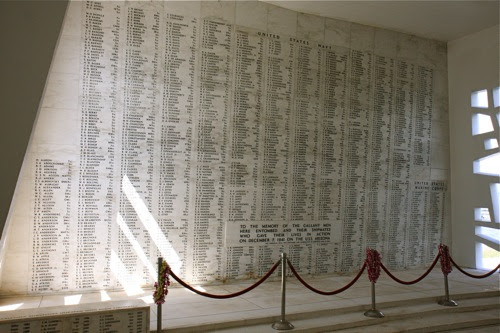 The names of the soldiers that died on the USS Arizona

Before you board a small boat to go the memorial shrine you usually watch a movie explaining the background of the attack. Included in this movie is the speech of Franklin D. Roosevelt on the day after the attack. He is talking about a 'day of infamy'.

Two weeks ago back in Germany I had one more strange Déjà-Vu related to Pearl Harbor.

I was at the movies and watched 'The Curious Case of Benjamin Button'. The movie plays in the 1940s and in one scene you can hear this speech of Roosevelt in the background. I was thrilled and thought 'Gosh, you know this speech. This is about Pearl Harbor. You know what it is about'.
It was really weird to realize how much more sensitive your senses are as soon as you have a connection to a place by visiting it.
If you want you can listen to the historical speech here.

I spent a lot of time at Pearl Harbor and didn't feel like going to the beach afterwards. I was a quite day but a good one, though.

One of my thoughts of this day - and don't get me wrong - was that at least this time the Germans were not the bad guys. Probably a dumb thought but not as dumb as killing each other for stupid political reasons.
Posted by Kosmonaut at 13:07