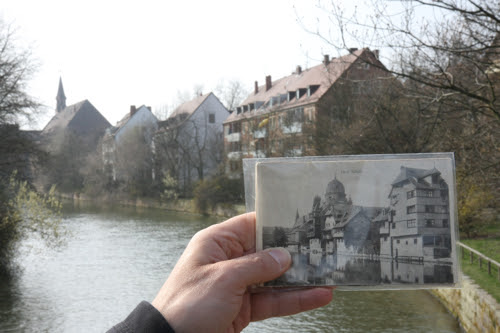 Insel Schuett, looks completely different. The synagogue with its dome was destroyed by the Nazis even before the 'Reichskristallnacht'
Click on photo to enlarge

Last year I found a big box of old postcards on a flee market in Munich. I rummaged in it and found a bunch of postcards from my city Nuremberg. They were shot before WW2 in the 1920s or 1930s.
I had the idea of looking for the exact spots were the photos have been taken and take a photo from today's Nuremberg just to compare old and new Nuremberg.

Last weekend I did it and strolled two days through the city in the footsteps of an unknown photographer from the last century.

During a breakfast in a cafe with a friend before my walk I showed my postcards to an old lady sitting on a table nearby. We talked and she explained some details on the old photos. It felt very intense when she told me about her memories of a bombing night. I can't imagine sitting in a dark cellar, feeling the earth shake and when you go outside again after an eternal night you see nothing but smoking debris where your city has been. Main Square with the famous fountain. Everything except the re-built Church of our Lady is gone. The fountain survived the bombings in a shell of bricks. But nowadays it is a replica because the original is in a museum.
Click on photo to enlarge

The whole walk was like constantly jumping back and forth in time. A glimpse at the postcard in my hand and I was in medieval Nuremberg and looking up again threw me back to a modern city with some ancient remains. 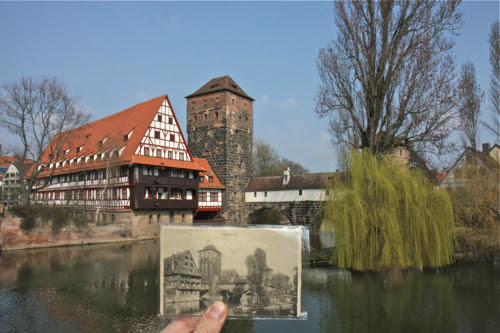 Henkersteg and Weinstadel (Hangman Bridge and Wine Barn). It looks almost the same. The trees on the island in the middle of the river are big and majestic now.
Click on photo to enlarge

From a photographer's point of view it was very hard to shoot the photos because I had to use a very high aperture value to get enough depth of field while focusing on the dark postcard in the foreground. I had to post-process them a lot to repair all the dark spots. This is why some of the photos look so artificial. View to the Imperial Castle from the Spittler Gate.
Click on photo to enlarge

I figured that the view on the postcard above is from on of the old towers in the city wall. It is now a museum for experiencing the senses and called 'Tower of the Senses'. I talk to the guy at the entrance and told him about my little 'post postcard walk'. He smiled and let my up the tower for some photos without paying the entrance fee. 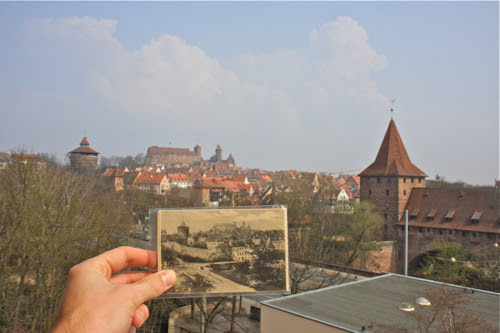 View towards the Haller Gate.
Click on photo to enlarge

The photo above was difficult to reproduce because it was taken above street level. Nowadays the area outside the Haller Gate is full of ugly 1950s multi-story apartment buildings.
A old man in a undershirt was leaning on the window sill in the 6th floor of one of the buildings.
I decided to dare it and screamed up to him. I told him my story about the old postcards and asked him whether he could let me in for a photo from the upper stairway window.
Guess what - he screamed down in a grumpy voice 'hm, I let you in'. Unbelievable.

Actually I think his sentence was his way to show extreme excitement about my postcard story. He was one of the prototypes of an old grumpy Franconian man.
Unfortunately he was gone afterwards to I couldn't thank him or even show him the photo. 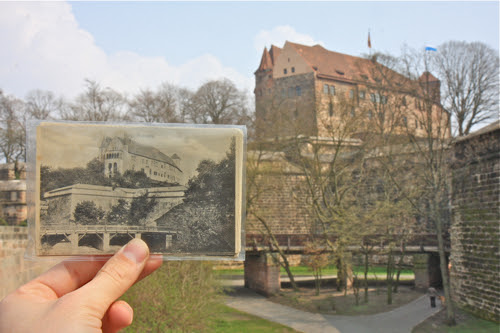 West Facade of the Imperial Castle. The jutty is gone.
Click on photo to enlarge

The Imperial Castle suffered hard in the bombing nights but it was one of the few parts of the medieval city that was rebuilt after the war. This is why the reality in 2009 looks kind of similar to the old postcards. But if you look closely you can see a lot of little differences between the old and the new castle. The back side of the castle with the Five-Cornered-Tower looks almost the same.
Click on photo to enlarge

I love the view of the back side of the castle. The tower to the right is called Fuenfeckturm (Five-Cornered-Tower) and the tower on the left has the funny German name 'Luginsland' ('Peek-into-the-land'). 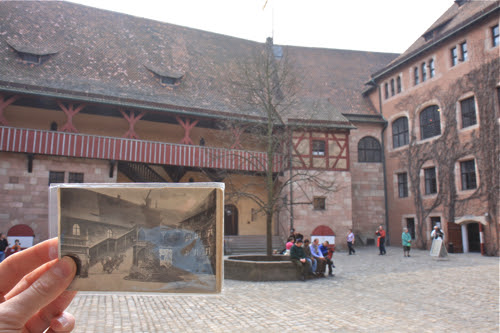 The courtyard of the Imperial Castle. The big trunk in the middle is now a young tree.
Click on photo to enlarge

I liked my little time journey a lot and I want to do it again with more old photos from not so touristy spots.