God, Mother Earth and All the Others / Hawaii 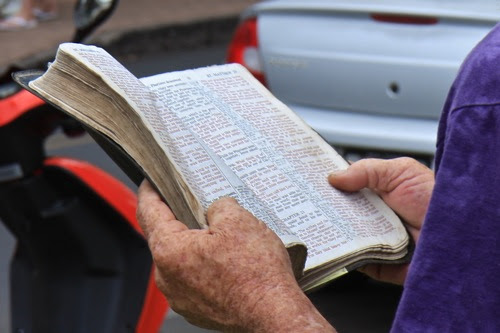 It surprised me that Hawaii was such a spiritual place.
Every other day a new spiritual moment flashed my brain.
I never found out why the Hawaiian islands are such a melting pot for men searching invisible things. Maybe it has something to do with all the volcanic activities and the fact that the earth is much more active than the rest of the world.

In Lahaina I saw this guy walking around on a public square reading out loud passages from the bible. He concentrated on the chapters about the end of the world, judgement day and Armageddon. The funny part was that his outfit wasn't the one of a decent preacher but colorful stuff. Impressive. 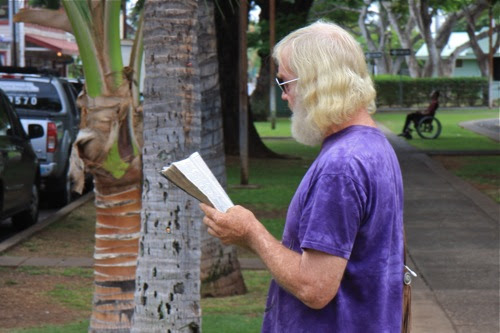 Only one hour later I saw the car below not far away. The message was completely different.
What was going on here?
Was it a kind of competition between the the-end-is-near-guys and the the-earth-will-exist-even-next-week-organisation?

Too bad that I hadn't had the chance to see both parties doing a vocal battle on the public square - like Hip Hop dudes dissing each other. Moses MC vs. Preach Diddy. 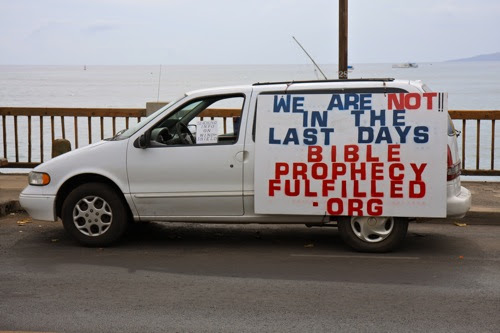 One hour later (literally) I walked by this little Buddhist temple. A completely different approach to eternity. Later I learned that Buddhism has a 9% share of Hawaiian religions. I liked the fact that all kinds of different believed seem to co-exist here. 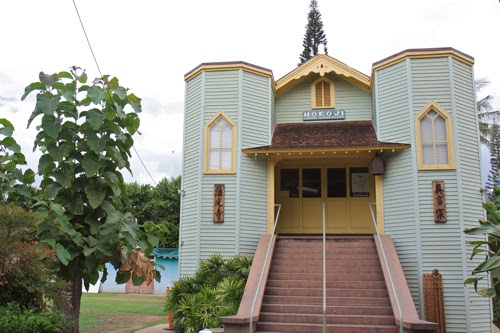 The Shingon Buddhist Mission in Lahaina

The strangest encounter for me happened in one of the hostels. A fellow traveler looked very much like a new age disciple - batik pants, pony tail and Jesus-sandals. I tried to avoid him because he tended to spread his wisdom in a kind of exhausting way.

Every morning I used to buy some pastry and a big cup of coffee in a very small French bakery and had breakfast on the lawn in front of the hostel.
It happened that the new age guy joined me followed by a blond party girl with hell of a hangover.
Immediately he told me that mother earth will rise in exactly 4 years from now. The mind of all human beings will be lifted to the next level - if one likes it or not.
He visited Hawaii for some spiritual event and his plan was to start an organisation that will take care of the earth as soon as the rumble starts in 4 years.
The next minutes seemed to be as long as the next 4 years for me because the guy switched to a kind of verbal rapid-fire mode. I was close to Nirvana.

Luckily for me the party girl relieved me because the preacher-guy noticed that she might be more than a disciple - maybe a disciple with benefits. Her hangover made her react very slowly (or it made her def).
By all means I made use of it, grumbled a 'have a nice day' and fled.

For the rest of my days on Hawaii I forwent every single batik shirt.

I should start thinking what to do with the remaining 4 years before the higher state of mind hits me. Any hints are appreciated.

Aloha, peace and happy Armageddon.
Posted by Kosmonaut at 20:38