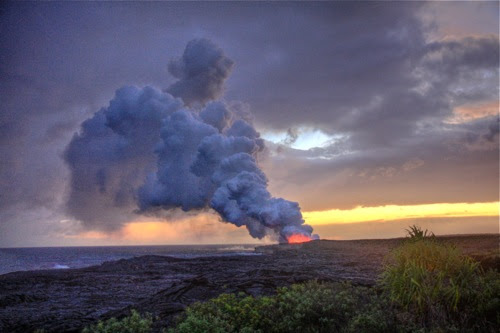 Probably a good vacation isn't perfect with at least one perfect sunset. I am right, ain't I?
This time I was able to "pimp" an already impressive sunset with a glowing cloud of steam.

There is a big 'river' of glowing lava flowing down the slopes of one of the volcanoes into the sea. It's forbidden to get close to the flow because of the toxic fume and road barriers block you several miles in front of the lava flow.
Some guys in my hostel told me that it is possible to get at least a bit closer by driving on a closed road and walk some distance. It is not as illegal as it might sound but you need the right directions because for obvious reasons there are no signs saying 'Toxic Lava Flow 2 Miles'.

Well, I got my directions, fetched my torch and drove towards the south end of Big Island.
I don't know why but for some situations you just remember the music you listened to. This was one of them and my iPod stumbled into some stuff from the German Punk band 'Vivos o Muertos'.

All of a sudden the road ended because it was covered by lava and a whole army of signs warned me with a lot of variations of 'enter at you own risk'. It was possible to drive on the lava for one more mile - it felt more or less like a bumpy normal road. I ended up in a kind of parking lot and walked the last mile to the shore.

Although I was on my own I was not alone. Some dozens of people also knew the spot for watching the lava flow sunset. I didn't care much for them.

I was sitting on a lava stone right above the shore and the lava flow was approx. one mile away.
The actual lava wasn't visible but the cloud was. Every time a big chunk of glowing stone dropped into the water the cloud glowed red like the gigantic version of these stupid IKEA lamps. Seeing this red cloud in front of the red sky was enough to capture my senses for 2 hours until it was completely dark and almost all the people were gone.
One more time nature managed to impress me with full force.

I hopped back through the darkness using my torch and during my drive back to Hilo I thought about perfect moments and that in some of them it is not necessary to have company - even if it is a kitschy sunset on a tropical island.

PS:
The photo is a HDR image and calculated out of 3 single long exposure shots. You might say the colors look a bit over the top but reality was much more colorful - far beyond the capabilities of any computer graphics card.
Posted by Kosmonaut at 06:02